‘Oumuamua as a Messenger from the Local Association

With a hyperbolic trajectory around the Sun, ‘Oumuamua is the first confirmed interstellar object. However, its origin is poorly known. By simulating the orbits of 0.23 million local stars, we find 109 encounters with periastron less than 5 pc. ‘Oumuamua’s low peculiar velocity is suggestive of its origin from a young stellar association with similar velocity. In particular, we find that ’Oumuamua would have had slow encounters with at least five young stars belonging to the Local Association, thus suggesting these as plausible sites for formation and ejection. In addition to an extremely elongated shape, the available observational data for ‘Oumuamua indicates a red color, suggestive of a potentially organic-rich and activity-free surface. These characteristics seem consistent with formation through energetic collisions between planets and debris objects in the middle part of a young stellar system. We estimate an abundance of at least 6.0 × 10-3 au-3 for such interstellar objects with mean diameter larger than 100 m and find that it is likely that most of them will be ejected into the Galactic halo. Our Bayesian analysis of the available light curves indicates a rotation period of {6.96}-0.39+1.45 {hr}, which is consistent with the estimation by Meech et al. and shorter than those in other literature. The codes and results are available on GitHub (https://github.com/phillippro/Oumuamua). 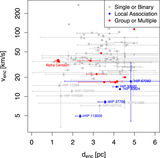