The Polarization of the Planet-Hosting WASP-18 System

We report observations of the linear polarization of the WASP-18 system, which harbors a massive (∼10 M J) planet orbiting close to its star with an orbital period of 0.94 days. We find that the WASP-18 system is polarized at ∼200 parts-per-million (ppm), likely from the interstellar medium predominantly, with no strong evidence for phase-dependent modulation from reflected light from the planet. We set an upper limit of 40 ppm (99% confidence level) on the amplitude of a reflected polarized light planetary signal. We compare the results with models for a number of processes that may produce polarized light in a planetary system to determine whether we can rule out any phenomena with this limit. Models of reflected light from thick clouds can approach or exceed this limit, but such clouds are unlikely at the high temperature of the WASP-18b atmosphere. Additionally, we model the expected polarization resulting from the transit of the planet across the star and find that this has an amplitude of ∼1.6 ppm, which is well below our detection limits. We also model the polarization due to the tidal distortion of the star by the massive planet and find that this is also too small to be measured currently. 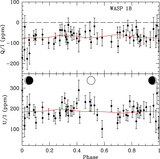