(3200) Phaethon is a compelling object as it has an asteroidal appearance and spectrum, produces a weak dust tail during perihelion at just 0.14 au, and is the parent body of the Geminid Meteor Shower. A better understanding of the physical properties of Phaethon is needed to understand the nature of its current and previous activity, relationship to potential source populations, and to plan for the upcoming flyby of the DESTINY+ spacecraft of Phaethon in the 2020s. We performed rotationally resolved spectroscopy of Phaethon at visible and near-infrared wavelengths (0.4-2.5 μm) in 2007 and 2017, respectively, to better understand its surface properties. The visible and near-infrared observations both spanned nearly a full rotation or more and were under similar observing geometries, covering the entire surface with the exception of the north pole. The visible wavelengths show blue slopes with only minor slope variations and no absorption features. The NIR data is minimally varying and concave upwards, from very blue to blue-neutral with increasing wavelength. We fit the short-wavelength tail of Phaethon’s thermal emission and retrieve an average visible albedo of p v = 0.08 ± 0.01, which is lower than previous measurements but plausible in light of the recent larger radar-measured diameter of Phaethon. We retrieve an average infrared beaming parameter of Phaethon of η = 1.70 ± 0.05, which is similar to previous results. We discuss the implications of Phaethon’s visible and near-infrared spectrum as well as the lower albedo on its origin, source population, and evolutionary history. 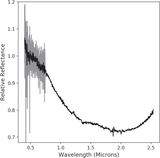