We determine candidate variable sources in the SuperWASP Data Release 1 (DR1) using multiple clustering methods and identifying variable candidates as outliers from large clusters. We extract 15,788,814 light curves that have more than 15 photometric measurements in the SuperWASP DR1. Variations in the light curves are described in terms of nine variability features that are complementary to each other. We consider three different clustering methods based on Gaussian mixture models, including one that was used in our previous work, assuming that real variable candidates can be found as minor clusters and at a distant from major clusters, which correspond to non-variable objects. The three different methods with a broad level of speed and precision prove that we can select a suitable method for detecting variable light curves, depending on the speed and precision constraints on clustering. We also consider a consensus clustering method that combines clustering results obtained using multiple clustering methods. The consensus clustering method improves the reliability of detecting variable candidates by combining information that is learned from a given data set by multiple methods. As a complete variability analysis of the public SuperWASP light curves, we provide clustering results obtained by using an infinite Gaussian mixture model in the framework of variational Bayesian inference, as well as variability indices of the light curves in an online database to help others exploit the SuperWASP data. 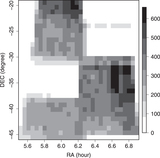