IC 166 is an intermediate-age open cluster (OC) (∼1 Gyr) that lies in the transition zone of the metallicity gradient in the outer disk. Its location, combined with our very limited knowledge of its salient features, make it an interesting object of study. We present the first high-resolution spectroscopic and precise kinematical analysis of IC 166, which lies in the outer disk with R GC ∼ 12.7 kpc. High-resolution H-band spectra were analyzed using observations from the SDSS-IV Apache Point Observatory Galactic Evolution Experiment survey. We made use of the Brussels Automatic Stellar Parameter code to provide chemical abundances based on a line-by-line approach for up to eight chemical elements (Mg, Si, Ca, Ti, Al, K, Mn, and Fe). The α-element (Mg, Si, Ca, and whenever available Ti) abundances, and their trends with Fe abundances have been analyzed for a total of 13 high-likelihood cluster members. No significant abundance scatter was found in any of the chemical species studied. Combining the positional, heliocentric distance, and kinematic information, we derive, for the first time, the probable orbit of IC 166 within a Galactic model including a rotating boxy bar, and found that it is likely that IC 166 formed in the Galactic disk, supporting its nature as an unremarkable Galactic OC with an orbit bound to the Galactic plane. 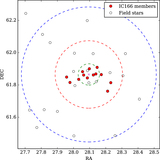