Binary stars make up a significant portion of all stellar systems. Consequently, an understanding of the bulk properties of binary stars is necessary for a full picture of star formation. Binary surveys indicate that both multiplicity fraction and typical orbital separation increase as functions of primary mass. Correlations with higher-order architectural parameters such as mass ratio are less well constrained. We seek to identify and characterize double-lined spectroscopic binaries (SB2s) among the 1350 M-dwarf ancillary science targets with APOGEE spectra in the SDSS-III Data Release 13. We measure the degree of asymmetry in the APOGEE pipeline cross-correlation functions (CCFs) and use those metrics to identify a sample of 44 high-likelihood candidate SB2s. At least 11 of these SB2s are known, having been previously identified by Deshpande et al. and/or El-Badry et al. We are able to extract radial velocities (RVs) for the components of 36 of these systems from their CCFs. With these RVs, we measure mass ratios for 29 SB2s and five SB3s. We use Bayesian techniques to fit maximum-likelihood (but still preliminary) orbits for four SB2s with eight or more distinct APOGEE observations. The observed (but incomplete) mass-ratio distribution of this sample rises quickly toward unity. Two-sided Kolmogorov-Smirnov tests find probabilities of 18.3% and 18.7%, demonstrating that the mass-ratio distribution of our sample is consistent with those measured by Pourbaix et al. and Fernandez et al., respectively. 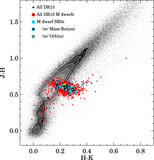