A Runaway Yellow Supergiant Star in the Small Magellanic Cloud

We recently discovered a yellow supergiant (YSG) in the Small Magellanic Cloud (SMC) with a heliocentric radial velocity of ∼300 km s-1, which is much larger than expected for a star at its location in the SMC. This is the first runaway YSG ever discovered and only the second evolved runaway star discovered in a galaxy other than the Milky Way. We classify the star as G5-8 I and use de-reddened broad-band colors with model atmospheres to determine an effective temperature of 4700 ± 250 K, consistent with what is expected from its spectral type. The star’s luminosity is then log L/L ⊙ ∼ 4.2 ± 0.1, consistent with it being a ∼30 Myr 9 M ⊙ star according to the Geneva evolution models. The star is currently located in the outer portion of the SMC’s body, but if the star’s transverse peculiar velocity is similar to its peculiar radial velocity, in 10 Myr the star would have moved 1.°6 across the disk of the SMC and could easily have been born in one of the SMC’s star-forming regions. Based on its large radial velocity, we suggest it originated in a binary system where the primary exploded as a supernovae, thus flinging the runaway star out into space. Such stars may provide an important mechanism for the dispersal of heavier elements in galaxies given the large percentage of massive stars that are runaways. In the future, we hope to look into additional evolved runaway stars that were discovered as part of our other past surveys. 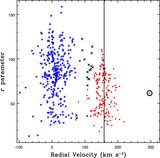