This is the second installment for the Large Sky Area Multi-Object Fibre Spectroscopic Telescope (LAMOST) Quasar Survey, which includes quasars observed from 2013 September to 2015 June. There are 9024 confirmed quasars in DR2 and 10911 in DR3. After cross-match with the Sloan Digital Sky Survey (SDSS) quasar catalogs and NED, 12126 quasars are discovered independently. Among them, 2225 quasars were released by SDSS DR12 QSO catalog in 2014 after we finalized the survey candidates. 1801 sources were identified by SDSS DR14 as QSOs. The remaining 8100 quasars are considered as newly founded, and among them, 6887 quasars can be given reliable emission line measurements and the estimated black hole masses. Quasars found in LAMOST are mostly located at low-to-moderate redshifts, with a mean value of 1.5. The highest redshift observed in DR2 and DR3 is 5. We applied emission line measurements to Hα, Hβ, Mg II, and C IV. We deduced the monochromatic continuum luminosities using photometry data, and estimated the virial black hole masses for the newly discovered quasars. Results are compiled into a quasar catalog, which will be available online. 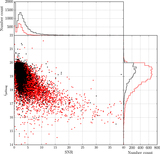