We report the discovery of a radial velocity signal that can be interpreted as a planetary-mass candidate orbiting the K dwarf HD 26965, with an orbital period of 42.364 ± 0.015 days, or alternatively, as the presence of residual, uncorrected rotational activity in the data. Observations include data from HIRES, PFS, CHIRON, and HARPS, where 1111 measurements were made over 16 years. Our best solution for HD 26965 b is consistent with a super-Earth that has a minimum mass of 6.92 ± 0.79 {M}\oplus orbiting at a distance of 0.215 ± 0.008 au from its host star. We have analyzed the correlation between spectral activity indicators and the radial velocities from each instrument, showing moderate correlations that we include in our model. From this analysis, we recover a ∼38-day signal, which matches some literature values of the stellar rotation period. However, from independent Mt. Wilson HK data for this star, we find evidence for a significant 42-day signal after subtraction of longer period magnetic cycles, casting doubt on the planetary hypothesis for this period. Although our statistical model strongly suggests that the 42-day signal is Doppler in origin, we conclude that the residual effects of stellar rotation are difficult to fully model and remove from this data set, highlighting the difficulties to disentangle small planetary signals and photospheric noise, particularly when the orbital periods are close to the rotation period of the star. This study serves as an excellent test case for future works that aim to detect small planets orbiting “Sun-like” stars using radial velocity measurements.

Some of the data presented herein were obtained at the W.M. Keck Observatory, which is operated as a scientific partnership among the California Institute of Technology, the University of California, and the National Aeronautics and Space Administration. The Observatory was made possible by the generous financial support of the W.M. Keck Foundation. 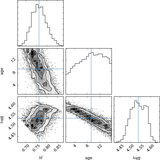