The Power of Simultaneous Multi-frequency Observations for mm-VLBI: Beyond Frequency Phase Transfer

Atmospheric propagation effects at millimeter wavelengths can significantly alter the phases of radio signals and reduce the coherence time, putting tight constraints on high-frequency Very Long Baseline Interferometry (VLBI) observations. In previous works, it has been shown that non-dispersive (e.g., tropospheric) effects can be calibrated with the frequency phase transfer (FPT) technique. The coherence time can thus be significantly extended. Ionospheric effects, which can still be significant, remain however uncalibrated after FPT as well as the instrumental effects. In this work, we implement a further phase transfer between two FPT residuals (i.e., so-called FPT-square) to calibrate the ionospheric effects based on their frequency dependence. We show that after FPT-square, the coherence time at 3 mm can be further extended beyond 8 hr and the residual phase errors can be sufficiently canceled by applying the calibration of another source, which can have a large angular separation from the target (> 20^\circ ) and significant temporal gaps. Calibrations for all-sky distributed sources with a few calibrators are also possible after FPT-square. One of the strengths and uniqueness of this calibration strategy is the suitability for high-frequency all-sky survey observations including very weak sources. We discuss the introduction of a pulse calibration system in the future to calibrate the remaining instrumental effects, allowing the possibility of imaging the source structure at high frequencies with FPT-square, where all phases are fully calibrated without involving any additional sources. 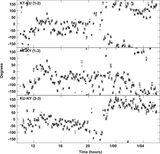