Aims: We present the first temperature surface map of EK Dra from very-high-resolution spectra obtained with the Potsdam Echelle Polarimetric and Spectroscopic Instrument (PEPSI) at the Large Binocular Telescope.
Methods: Changes in spectral line profiles are inverted to a stellar surface temperature map using our iMap code. The long-term photometric record is employed to compare our map with previously published maps.
Results: Four cool spots were reconstructed, but no polar spot was seen. The temperature difference to the photosphere of the spots is between 990 and 280 K. Two spots are reconstructed with a typical solar morphology with an umbra and a penumbra. For the one isolated and relatively round spot (spot A), we determine an umbral temperature of 990 K and a penumbral temperature of 180 K below photospheric temperature. The umbra to photosphere intensity ratio of EK Dra is approximately only half of that of a comparison sunspot. A test inversion from degraded line profiles showed that the higher spectral resolution of PEPSI reconstructs the surface with a temperature difference that is on average 10% higher than before and with smaller surface areas by 10-20%. PEPSI is therefore better suited to detecting and characterising temperature inhomogeneities. With ten more years of photometry, we also refine the spot cycle period of EK Dra to 8.9 ± 0.2 yr with a continuing long-term fading trend.
Conclusions: The temperature morphology of spot A so far appears to show the best evidence for the existence of a solar-like penumbra for a starspot. We emphasise that it is more the non-capture of the true umbral contrast rather than the detection of the weak penumbra that is the limiting factor. The relatively small line broadening of EK Dra, together with the only moderately high spectral resolutions previously available, appear to be the main contributors to the lower-than-expected spot contrasts when comparing to the Sun.

Based on data acquired with PEPSI using the Large Binocular Telescope (LBT). 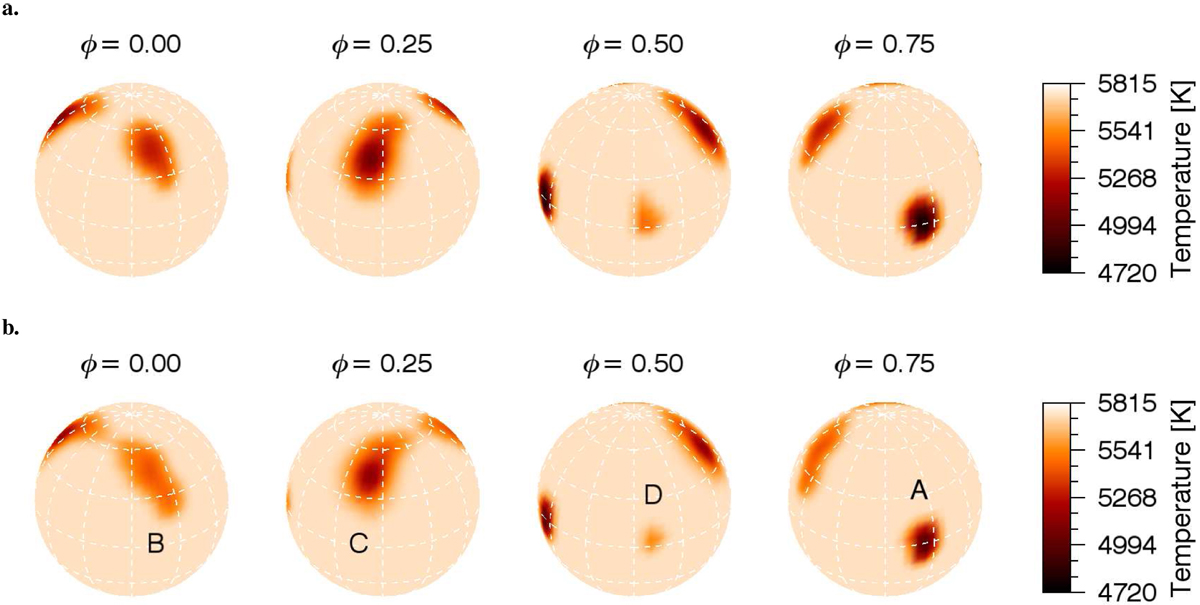