Context. The most highly accreting quasars are of special interest in studies of the physics of active galactic nuclei (AGNs) and host galaxy evolution. Quasars accreting at high rates (L/LEdd ∼ 1) hold promise for use as "standard candles": distance indicators detectable at very high redshift. However, their observational properties are still largely unknown.
Aims: We seek to identify a significant number of extreme accretors. A large sample can clarify the main properties of quasars radiating near L/LEdd ∼ 1 (in this paper they are designated as extreme Population A quasars or simply as extreme accretors) in the Hβ spectral range for redshift ≲0.8.
Methods: We use selection criteria derived from four-dimensional Eigenvector 1 (4DE1) studies to identify and analyze spectra for a sample of 334 candidate sources identified from the SDSS DR7 database. The source spectra were chosen to show a ratio RFeII between the FeII emission blend at λ4570 and Hβ, RFeII > 1. Composite spectra were analyzed for systematic trends as a function of Fe II strength, line width, and [OIII] strength. We introduced tighter constraints on the signal-to-noise ratio (S/N) and RFeII values that allowed us to isolate sources most likely to be extreme accretors.
Results: We provide a database of detailed measurements. Analysis of the data allows us to confirm that Hβ shows a Lorentzian function with a full width at half maximum (FWHM) of Hβ ≤ 4000 km s-1. We find no evidence for a discontinuity at 2000 km s-1 in the 4DE1, which could mean that the sources below this FWHM value do not belong to a different AGN class. Systematic [OIII] blue shifts, as well as a blueshifted component in Hβ are revealed. We interpret the blueshifts as related to the signature of outflowing gas from the quasar central engine. The FWHM of Hβ is still affected by the blueshifted emission; however, the effect is non-negligible if the FWHM Hβ is used as a "virial broadening estimator" (VBE). We emphasize a strong effect of the viewing angle on Hβ broadening, deriving a correction for those sources that shows major disagreement between virial and concordance cosmology luminosity values.
Conclusions: The relatively large scatter between concordance cosmology and virial luminosity estimates can be reduced (by an order of magnitude) if a correction for orientation effects is included in the FWHM Hβ value; outflow and sample definition yield relatively minor effects. 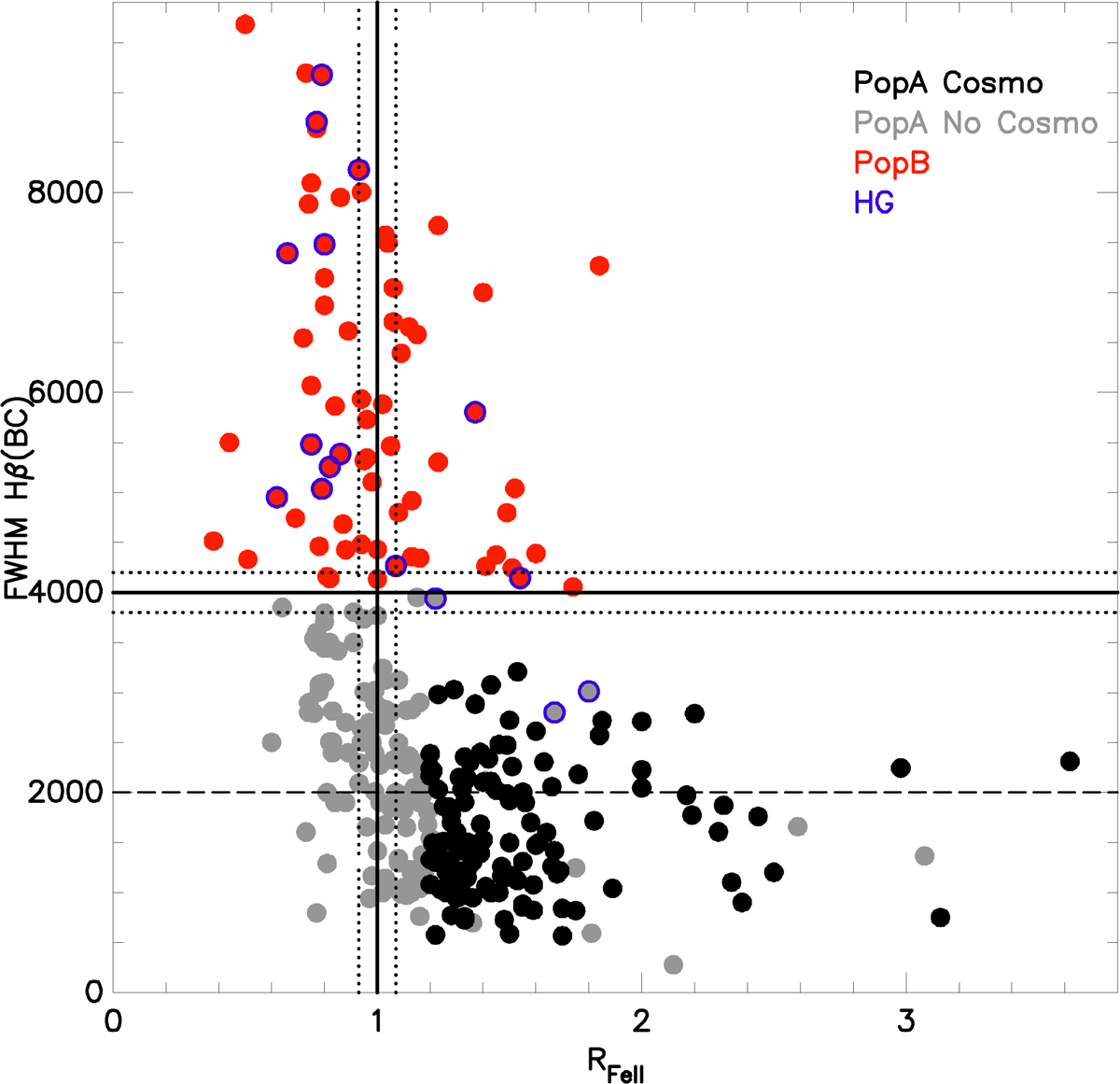