Evolution of protoplanetary disks from their taxonomy in scattered light: spirals, rings, cavities, and shadows

Context. Dozens of protoplanetary disks have been imaged in scattered light during the last decade.
Aims: The variety of brightness, extension, and morphology from this census motivates a taxonomical study of protoplanetary disks in polarimetric light to constrain their evolution and establish the current framework of this type of observation.
Methods: We classified 58 disks with available polarimetric observations into six major categories (Ring, Spiral, Giant, Rim, Faint, and Small disks) based on their appearance in scattered light. We re-calculated the stellar and disk properties from the newly available Gaia DR2 and related these properties with the disk categories.
Results: More than half of our sample shows disk substructures. For the remaining sources, the absence of detected features is due to their faintness, their small size, or the disk geometry. Faint disks are typically found around young stars and typically host no cavity. There is a possible dichotomy in the near-infrared (NIR) excess of sources with spiral-disks (high) and ring-disks (low). Like spirals, shadows are associated with a high NIR excess. If we account for the pre-main sequence evolutionary timescale of stars with different mass, spiral arms are likely associated with old disks. We also found a loose, shallow declining trend for the disk dust mass with time.
Conclusions: Protoplanetary disks may form substructures like rings very early in their evolution but their detectability in scattered light is limited to relatively old sources ( ≳5 Myr) where the recurrently detected disk cavities cause the outer disk to be illuminate. The shallow decrease of disk mass with time might be due to a selection effect, where disks observed thus far in scattered light are typically massive, bright transition disks with longer lifetimes than most disks. Our study points toward spirals and shadows being generated by planets of a fraction of a Jupiter mass to a few Jupiter masses in size that leave their (observed) imprint on both the inner disk near the star and the outer disk cavity. 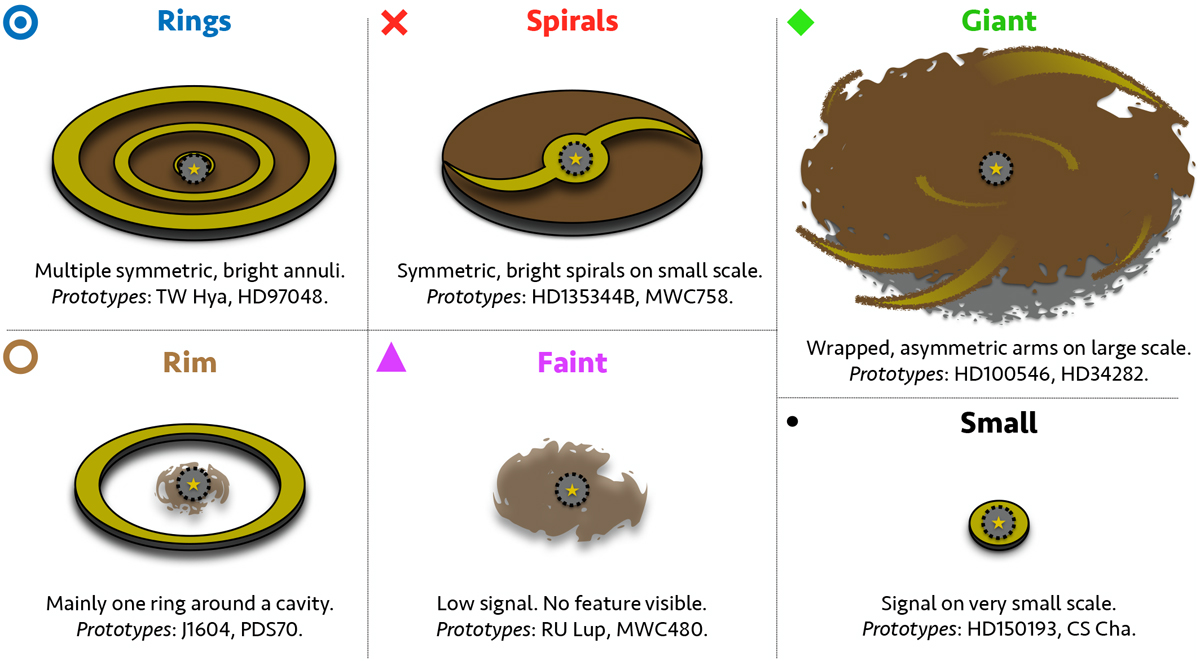