Context. Asteroid (16) Psyche is the target of the NASA Psyche mission. It is considered one of the few main-belt bodies that could be an exposed proto-planetary metallic core and that would thus be related to iron meteorites. Such an association is however challenged by both its near- and mid-infrared spectral properties and the reported estimates of its density.
Aims: Here, we aim to refine the density of (16) Psyche to set further constraints on its bulk composition and determine its potential meteoritic analog.
Methods: We observed (16) Psyche with ESO VLT/SPHERE/ZIMPOL as part of our large program (ID 199.C-0074). We used the high angular resolution of these observations to refine Psyche's three-dimensional (3D) shape model and subsequently its density when combined with the most recent mass estimates. In addition, we searched for potential companions around the asteroid.
Results: We derived a bulk density of 3.99 ± 0.26 g cm-3 for Psyche. While such density is incompatible at the 3-sigma level with any iron meteorites (∼7.8 g cm-3), it appears fully consistent with that of stony-iron meteorites such as mesosiderites (density ∼4.25 g cm-3). In addition, we found no satellite in our images and set an upper limit on the diameter of any non-detected satellite of 1460 ± 200 m at 150 km from Psyche (0.2% × RHill, the Hill radius) and 800 ± 200 m at 2000 km (3% × RHill).
Conclusions: Considering that the visible and near-infrared spectral properties of mesosiderites are similar to those of Psyche, there is merit to a long-published initial hypothesis that Psyche could be a plausible candidate parent body for mesosiderites.

Based on observations made with 1) ESO Telescopes at the La Silla Paranal Observatory under programs 086.C-0785 (PI Carry) and 199.C-0074 (PI Vernazza); and 2) the W. M. Keck Observatory, which is operated as a scientific partnership among the California Institute of Technology, the University of California and the National Aeronautics and Space Administration. The Observatory was made possible by the generous financial support of the W. M. Keck Foundation.Tables A1 and A2 and reduced images are only available at the CDS via anonymous ftp to http://cdsarc.u-strasbg.fr (ftp://130.79.128.5) or via http://cdsarc.u-strasbg.fr/viz-bin/qcat?J/A+A/619/L3 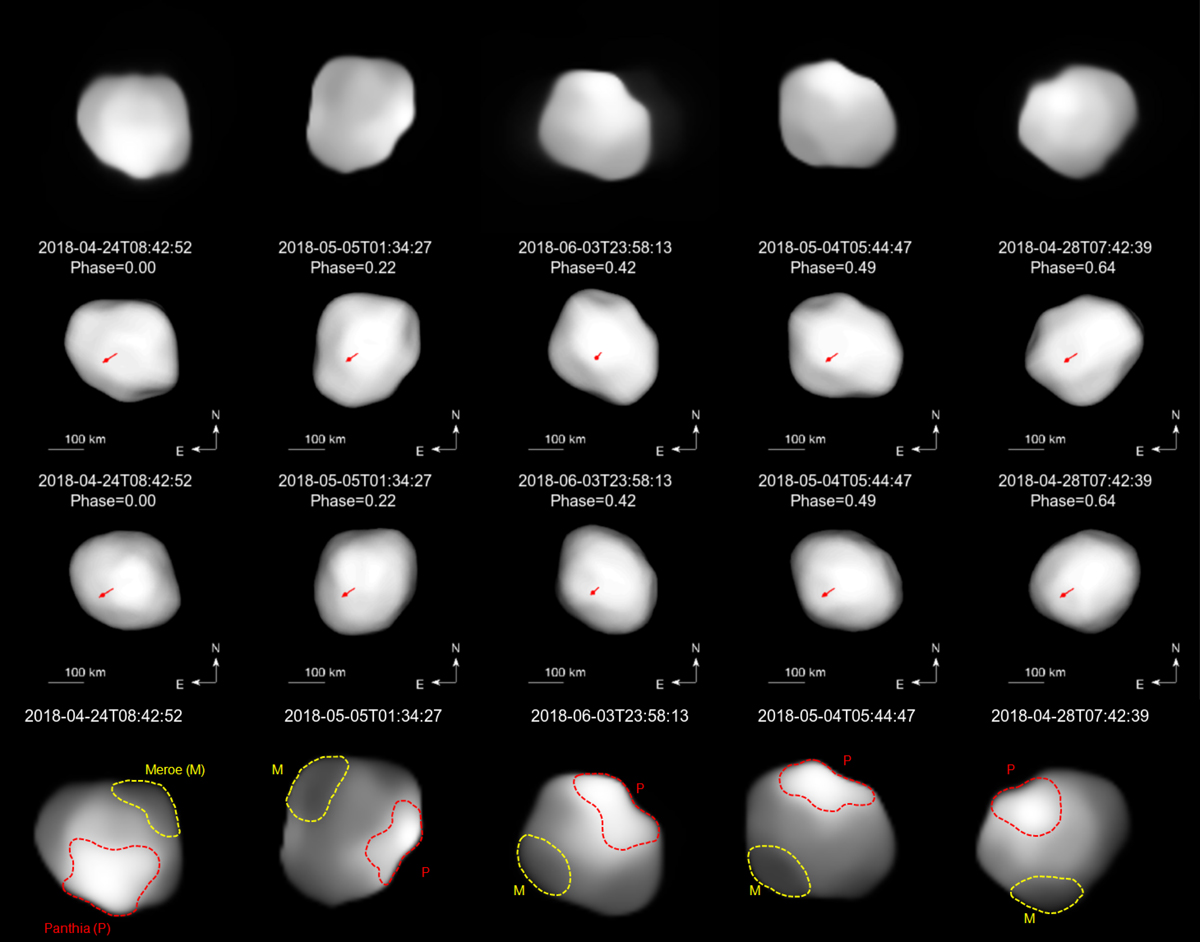