S-PASS view of polarized Galactic synchrotron at 2.3 GHz as a contaminant to CMB observations

We have analyzed the southern sky emission in linear polarization at 2.3 GHz as observed by the S -band Polarization All Sky Survey (S-PASS). Our purpose is to study the properties of the diffuse Galactic polarized synchrotron as a contaminant to B-mode observations of the cosmic microwave background (CMB) polarization. We studied the angular distribution of the S-PASS signal at intermediate and high Galactic latitudes by means of the polarization angular power spectra. The power spectra, computed in the multipole interval 20 ≤ ℓ ≤ 1000, show a decay of the spectral amplitude as a function of multipole for ℓ ≲ 200, typical of the diffuse emission. At smaller angular scales, power spectra are dominated by the radio point source radiation. We find that, at low multipoles, spectra can be approximated by a power law CℓEE,BB ∝ ℓα, with α ≃ -3, and characterized by a B-to-E ratio of about 0.5. We measured the polarized synchrotron spectral energy distribution (SED) in harmonic space, by combining S-PASS power spectra with low frequency WMAP and Planck ones, and by fitting their frequency dependence in six multipole bins, in the range 20 ≤ ℓ ≤ 140. Results show that the recovered SED, in the frequency range 2.3-33 GHz, is compatible with a power law with βs = -3.22 ± 0.08, which appears to be constant over the considered multipole range and in the different Galactic cuts. Combining the S-PASS total polarized intensity maps with those coming from WMAP and Planck we derived a map of the synchrotron spectral index βs at angular resolution of 2° on about 30% of the sky. The recovered βs distribution peaks at the value around -3.2. It exibits an angular power spectrum which can be approximated with a power law Cℓ ∝ ℓγ with γ ≃ -2.6. We also measured a significant spatial correlation between synchrotron and thermal dust signals, as traced by the Planck 353 GHz channel. This correlation reaches about 40% on the larger angular scales, decaying considerably at the degree scales. Finally, we used the S-PASS maps to assess the polarized synchrotron contamination to CMB observations of the B-modes at higher frequencies. We divided the sky in small patches (with fsky ≃ 1%) and find that, at 90 GHz, the minimal contamination, in the cleanest regions of the sky, is at the level of an equivalent tensor-to-scalar ratio rsynch ≃ 10-3. Moreover, by combining S-PASS data with Planck 353 GHz observations, we recover a map of the minimum level of total polarized foreground contamination to B-modes, finding that there is no region of the sky, at any frequency, where this contamination lies below equivalent tenor-to-scalar ratio rFG ≃ 10-3. This result confirms the importance of observing both high and low frequency foregrounds in CMB B-mode measurements. 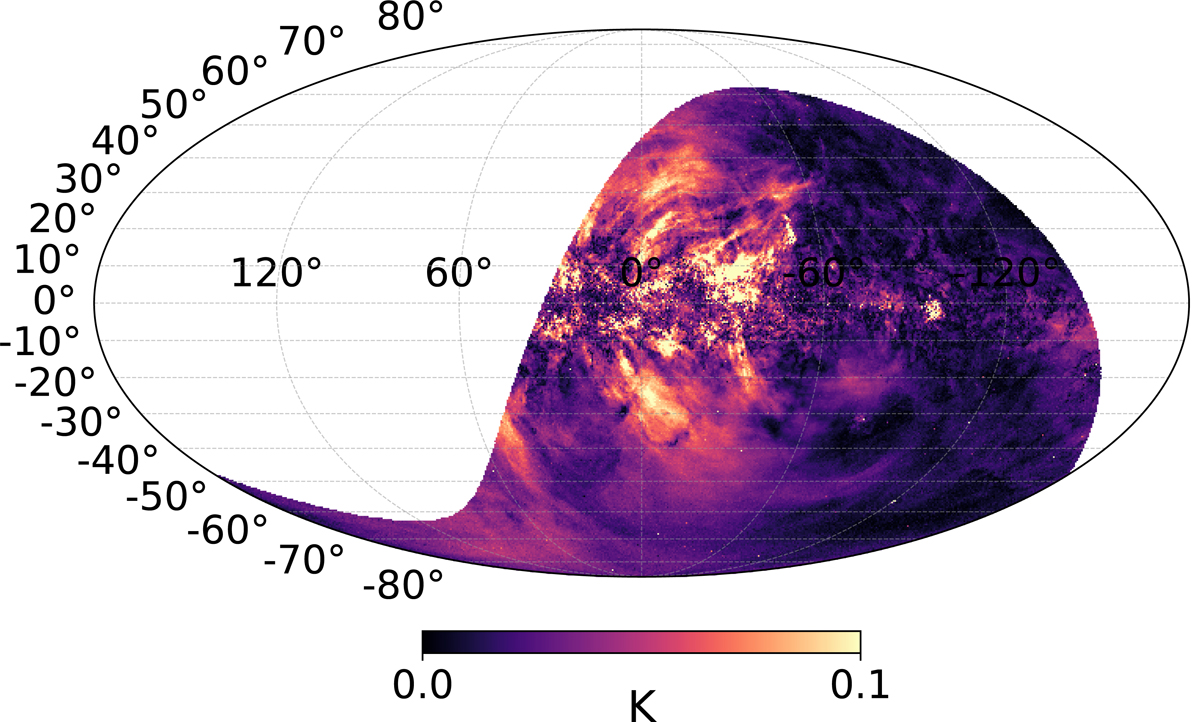