Spectroscopic characterization of the protocluster of galaxies around 7C 1756+6520 at z 1.4


Aims: The aim of this paper is the spectroscopic study of 13 galaxies belonging to the field of the protocluster associated with the radio galaxy 7C 1756+6520 at z = 1.4156. In particular, we focus on the characterization of the nuclear activity.
Methods: This analysis has been performed on rest-frame optical spectra taken with the Large Binocular Telescope, using the spectrograph LUCI, which is operative in the near-infrared domain. The adopted spectral coverage allowed us to observe emission lines such as Hα, Hβ, [O III]λ 5007 Å, and [N II]λ 6583 Å at the redshift of the central radio galaxy. We observed the central part of the protocluster, which is suitable to include the radio galaxy, several spectroscopically confirmed active galactic nuclei (AGN) belonging to the protocluster, and other objects that might be members of the protocluster.
Results: For four previously identified protocluster members, we derived the redshift by detecting emission lines that have never detected before for these galaxies. We identified a new protocluster member and eight new possible protocluster members. The stacked spectrum of the galaxies in which we detected the [O III]λ 5007 Å emission line revealed the second line of the [O III] doublet at 4959 Å and the Hβ line, which confirms that they belong to the protocluster. By collecting all members identified so far in this work and other members from the literature, we defined 31 galaxies, including the central radio galaxy, around the redshift 1.4152 ± 0.056. This corresponds to peculiar velocities ≲5000 km s-1 with respect to the radio galaxy. The position versus velocity phase-space diagram suggests that three AGN of the protocluster and the central radio galaxy might be a virialized population that has been coexisting for a long time in the densest core region of this forming structure. This protocluster is characterized by a high fraction of AGN ( 23%). For one of them, AGN1317, we produced two so-called Baldwin, Phillips & Terlevich (BPT) diagrams. The high fraction of AGN and their distribution within the protocluster seem to be consistent with predictions of some theoretical models on AGN growth and feedback. These models are based on galaxy interactions and ram pressure as triggers of AGN activity.
Conclusions: The high fraction of AGN belonging to the protocluster suggests that they were likely triggered at the same time, maybe by the ongoing formation of the protocluster. Observations of AGN in this protocluster and in other distant clusters will help clarifying whether the resulting high fraction of AGN is unusual or typical for such structures at high redshift. Our next step will be analyses of previously acquired high-resolution radio data of the central radio galaxy to derive information on the nature of the radio galaxy and connect it with its cosmic evolution.

Based on data acquired using the Large Binocular Telescope (LBT). The LBT is an international collaboration among institutions in the United States, Italy and Germany. LBT Corporation partners are: The University of Arizona on behalf of the Arizona university system; Istituto Nazionale di Astrofisica, Italy; LBT Beteiligungsgesellschaft, Germany, representing the Max-Planck Society, the Astrophysical Institute Potsdam, and Heidelberg University; The Ohio State University, and The Research Corporation, on behalf of The University of Notre Dame, University of Minnesota and University of Virginia. 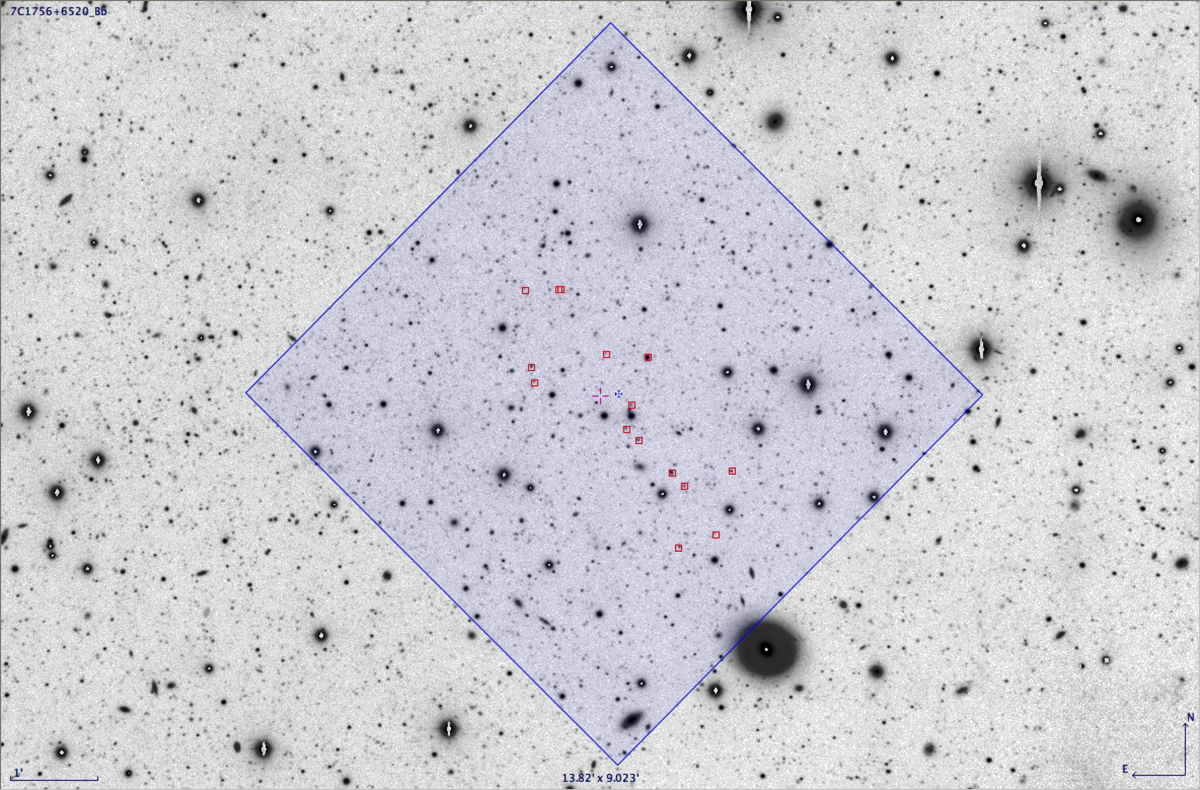