Context. Umbral flashes (UFs) are most common phenomenon of wave processes in sunspots. Studying the relationship between wave time dynamics and the origin of UFs requires further investigation of their fine spatial and height structure.
Aims: We investigated the association between a short time increase in the variations of 3-min extreme ultraviolet (EUV) emission at footpoints of coronal magnetic loops and the UF emergence in sunspot umbra. The spatial structure of magnetic field lines and their inclination determine the cut-off frequency and visibility of sunspot waves.
Methods: We applied the pixelized wavelet filtering (PWF) technique to analyse a cube of the images obtained by SDO/AIA at 1600 Å, 304 Å, and 171 Å to study the spatio-temporal oscillation power distribution in individual magnetic loops. Time-distance plots were used to obtain the wave front propagation velocity.
Results: For the first time, we obtained the 2D images of the fine wave processes in magnetic structures of different spatial scales related to the UFs in sunspot. We revealed two types of the UFs as background and local. The background UFs associated with random increasing of separate parts of wave fronts. These UFs are seen as weak and diffuse details that ride the wave fronts without stable shapes and localization in space. The local UFs sources mainly localize near to the footpoint of magnetic loops, anchored in an umbra, along which the propagation of 3-min waves was observed. The time dynamics of flash evolution shows an increase in 3-min oscillations before the UFs peak value within one low-frequency wave train. It is shown that the maxima of 3-min oscillation trains coincide with the peak intensity of UFs. During the UFs evolution, a fine wave spatial and temporal dynamics in UFs local sources was observed.
Conclusions: The sunspot 3-min wave dynamics showed a relation between the localization of oscillations power peak at the coronal magnetic loop footpoints and the UFs origin. The spatial structure of the UFs sources, their power, and lifetime are determined by the cut-off frequency of the waves for the detected waveguides. We concluded that UFs are a global process of short-time increase of the wave activity. 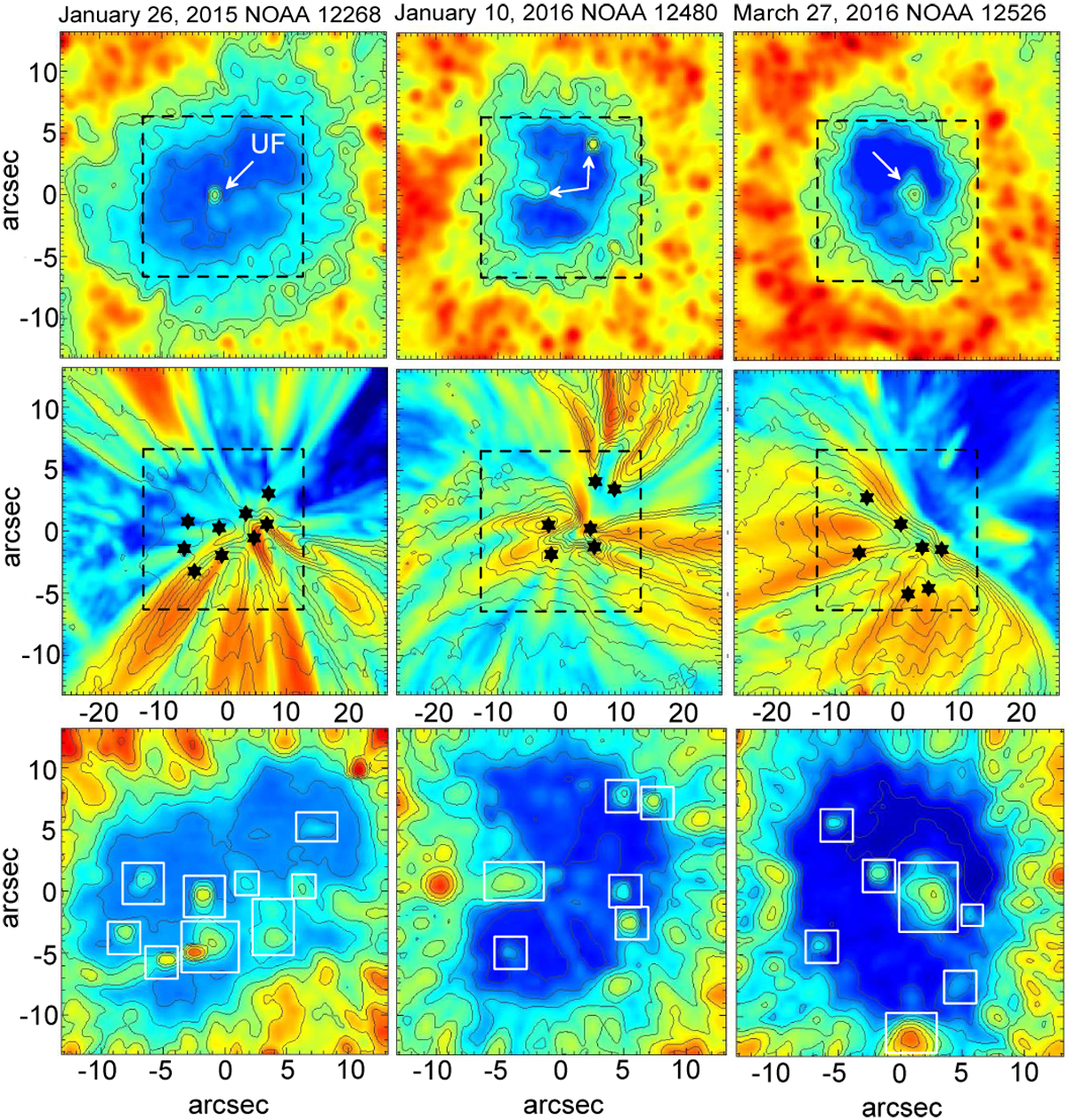