The Close AGN Reference Survey (CARS). No evidence of galaxy-scale hot outflows in two nearby AGN


Aims: We probe the radiatively-efficient, hot wind feedback mode in two nearby luminous unobscured (type 1) AGN from the Close AGN Reference Survey (CARS), which show intriguing kpc-scale arc-like features of extended [O III]ionized gas as mapped with VLT-MUSE. We aimed to detect hot gas bubbles that would indicate the existence of powerful, galaxy-scale outflows in our targets, HE 0227-0931 and HE 0351+0240, from deep (200 ks) Chandra observations.
Methods: By measuring the spatial and spectral properties of the extended X-ray emission and comparing with the sub kpc-scale IFU data, we are able to constrain feedback scenarios and directly test if the ionized gas is due to a shocked wind.
Results: No extended hot gas emission on kpc-scales was detected. Unless the ambient medium density is low (n H ∼ 1 cm-3 at 100 pc), the inferred upper limits on the extended X-ray luminosities are well below what is expected from theoretical models at matching AGN luminosities.
Conclusions: We conclude that the highly-ionized gas structures on kpc scales are not inflated by a hot outflow in either target, and instead are likely caused by photoionization of pre-existing gas streams of different origins. Our nondetections suggest that extended X-ray emission from an AGN-driven wind is not universal, and may lead to conflicts with current theoretical predictions.

The scientific results reported in this article are based on observations made by the Chandra X-ray Observatory (PI: G. Tremblay, ID: 17700519), and on observations collected at the European Organization for Astronomical Research in the Southern Hemisphere under ESO program(s) 094.B-0345(A) (PI: B. Husemann). 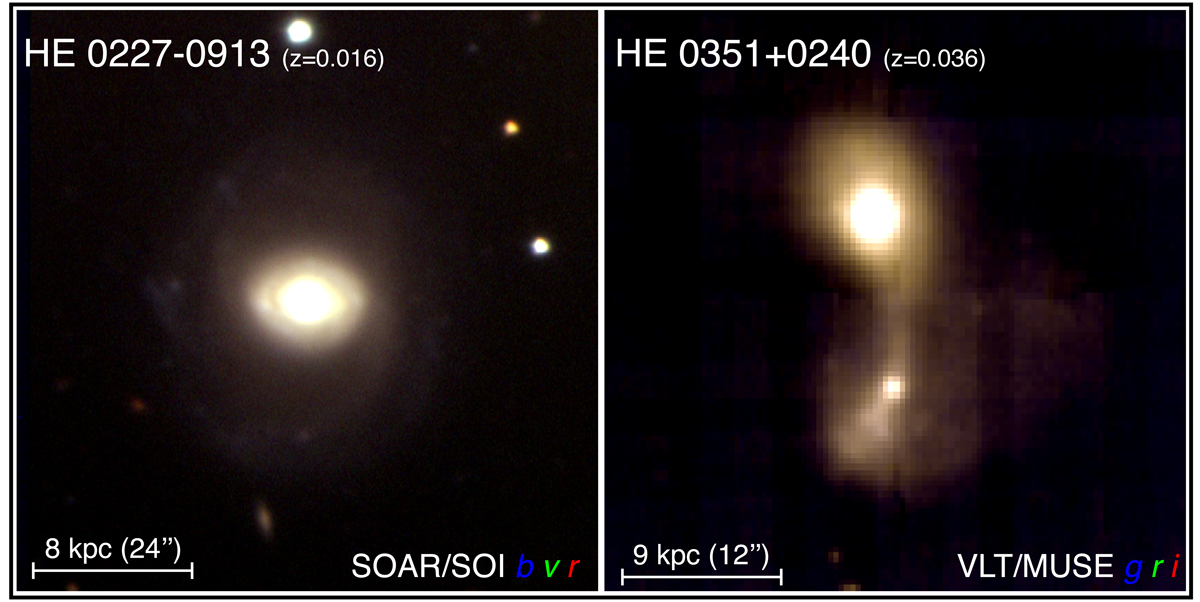