Aims: This paper investigates how the far-IR water ice features can be used to infer properties of disks around T Tauri stars and the water ice thermal history. We explore the power of future observations with SOFIA/HIRMES and SPICA's proposed far-IR instrument SAFARI.
Methods: A series of detailed radiative transfer disk models around a representative T Tauri star are used to investigate how the far-IR water ice features at 45 and 63 μm change with key disk properties: disk size, grain sizes, disk dust mass, dust settling, and ice thickness. In addition, a series of models is devised to calculate the water ice emission features from warmup, direct deposit, and cooldown scenarios of the water ice in disks.
Results: Photodesorption from icy grains in disk surfaces weakens the mid-IR water ice features by factors of 4-5. The far-IR water ice emission features originate from small grains at the surface snow line in disks at distance of 10-100 au. Unless this reservoir is missing in disks (e.g., transitional disks with large cavities), the feature strength does not change. Grains larger than 10 μm do not contribute to the features. Grain settling (using turbulent description) affects the strength of the ice features by at most 15%. The strength of the ice feature scales with the disk dust mass and water ice fraction on the grains, but saturates for dust masses higher than 10-4 M⊙ and for ice mantles that increase the dust mass by more than 50%. The various thermal histories of water ice leave an imprint on the shape of the features (crystalline and/or amorphous) and on the peak strength and position of the 45 μm feature. SOFIA/HIRMES can only detect crystalline ice features that are much stronger than those simulated in our standard T Tauri disk model in deep exposures (1 h). SPICA/SAFARI can detect the typical ice features in our standard T Tauri disk model in short exposures (10 min).
Conclusions: The sensitivity of SPICA/SAFARI will allow the detailed study of the 45 and 63 μm water ice feature in unbiased surveys of T Tauri stars in nearby star forming regions and an estimate of the mass of their ice reservoir. The water ice emission features carry an imprint of the thermal history of the ice, and thus can distinguish between various formation and transport scenarios. Amorphous ice at 45 μm that has a much broader and flatter peak could be detected in deep surveys if the underlying continuum can be well characterized and the baseline stability of SAFARI is better than a few percent. 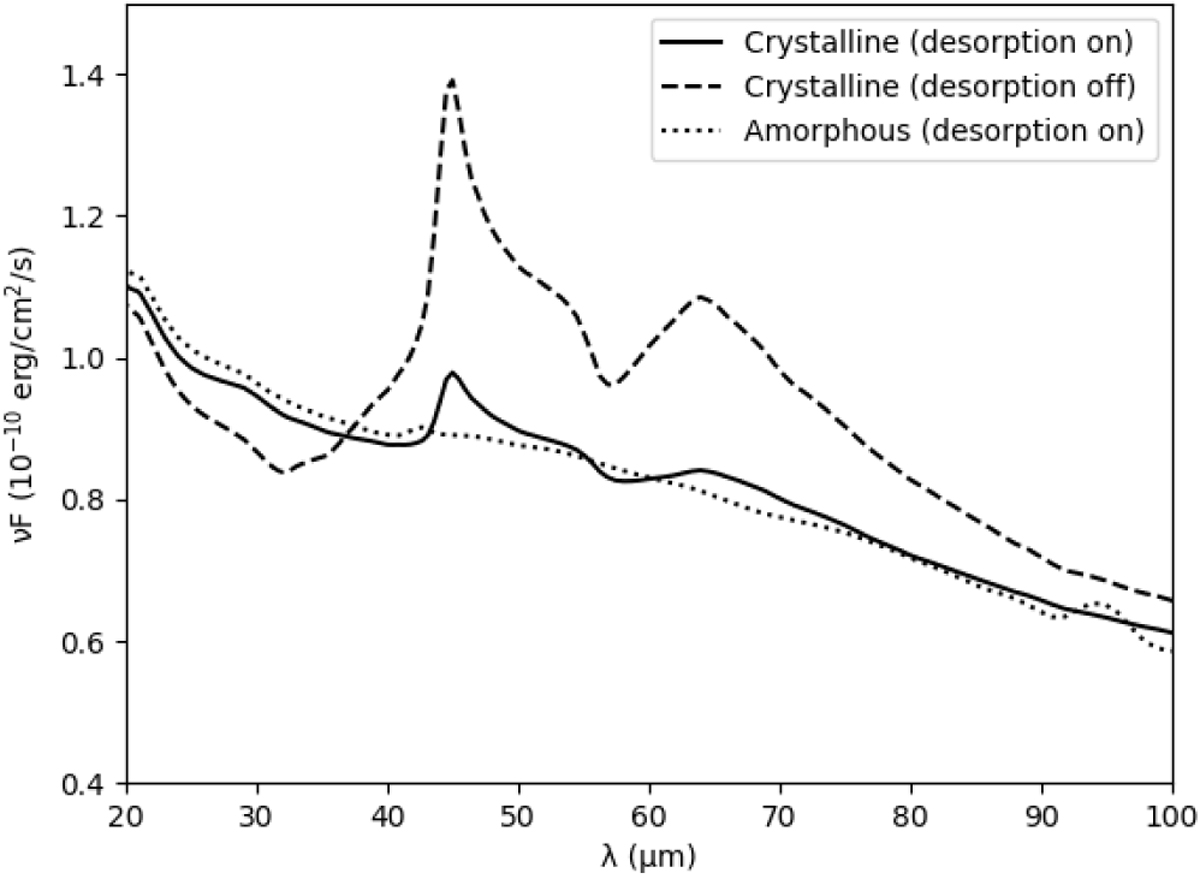