Context. Mid- and far-infrared observations of the environment around embedded protostars reveal a plethora of high-excitation molecular and atomic emission lines. A number of different mechanisms for the origin of these lines have been proposed, including shocks induced by protostellar jets and radiation by the embedded protostar interacting with its immediate surroundings.
Aims: We employ extended spectral-line maps that spatially resolve regions where diverse excitation processes appear to dominate. Studying the morphology and excitation of the most important molecular and atomic coolants, we aim to constrain the physical conditions around the embedded protostellar system HH 211-mm.
Methods: Spectro-imaging observations with Herschel/PACS provide emission from major molecular (CO, H2O and OH) and atomic coolants (e.g. [O I]). Emission line maps reveal the morphology of the observed emissions and allow associations between the different species. Comparisons are also made with mid-infrared line maps from Spitzer and sub-mm interferometers. The excitation conditions of the detected molecular species along with the ortho-to-para ratio of water are assessed through Boltzmann diagrams. Further investigations focus on constraining the CO/H2 ratio in shocks and the mass flux of the atomic jet as traced by [O I].
Results: Molecular lines are exited mainly at the terminal bowshocks of the outflow and around the position of the protostar. All lines show maxima at the SE bowshock with the exception of water emission that peaks around the central source. Excitation analysis in all positions shows that CO and H2O are mainly thermally excited at Tex 350 and 90 K respectively, with the CO showing a second temperature component at 750 K towards the SE peak. Excitation analysis breaks down in the case of OH at the blue-shifted bowshock, indicating that the molecule is non-thermally excited. Comparisons between the CO and H2 column densities suggest that the X[CO] value in shocks can be up to an order of magnitude lower than the canonical value of 10-4. The water ortho-to-para ratio around the protostar is only 0.65, indicating low-temperature water ice formation followed by non-distructive photodesorption from the dust grains. The two-sided total atomic mass flux estimated from the [O I] jet sums to 1.65 × 10-6 M⊙ yr-1, a value that is very close to the mass flux previously estimated for the SiO jet and the H2Outflow.
Conclusions: The bulk of the cooling from CO, OH and [O I] is associated with gas excited in outflow shocks, with the blue-shifted (SE) outflow showing evidence of a shock-induced UV field responsible for the OH emission. Water lines around the protostar reveal a very low ortho-to-para ratio that can be interpreted in terms of formation from a primordial gas reservoir in the envelope. Finally comparison of the [O I] jet mass flux with the mass fluxes derived for SiO and H2 renders HH 211 the first embedded system where an atomic jet is demonstrably shown to possess enough momentum to drive the observed molecular jets and large-scale outflows. 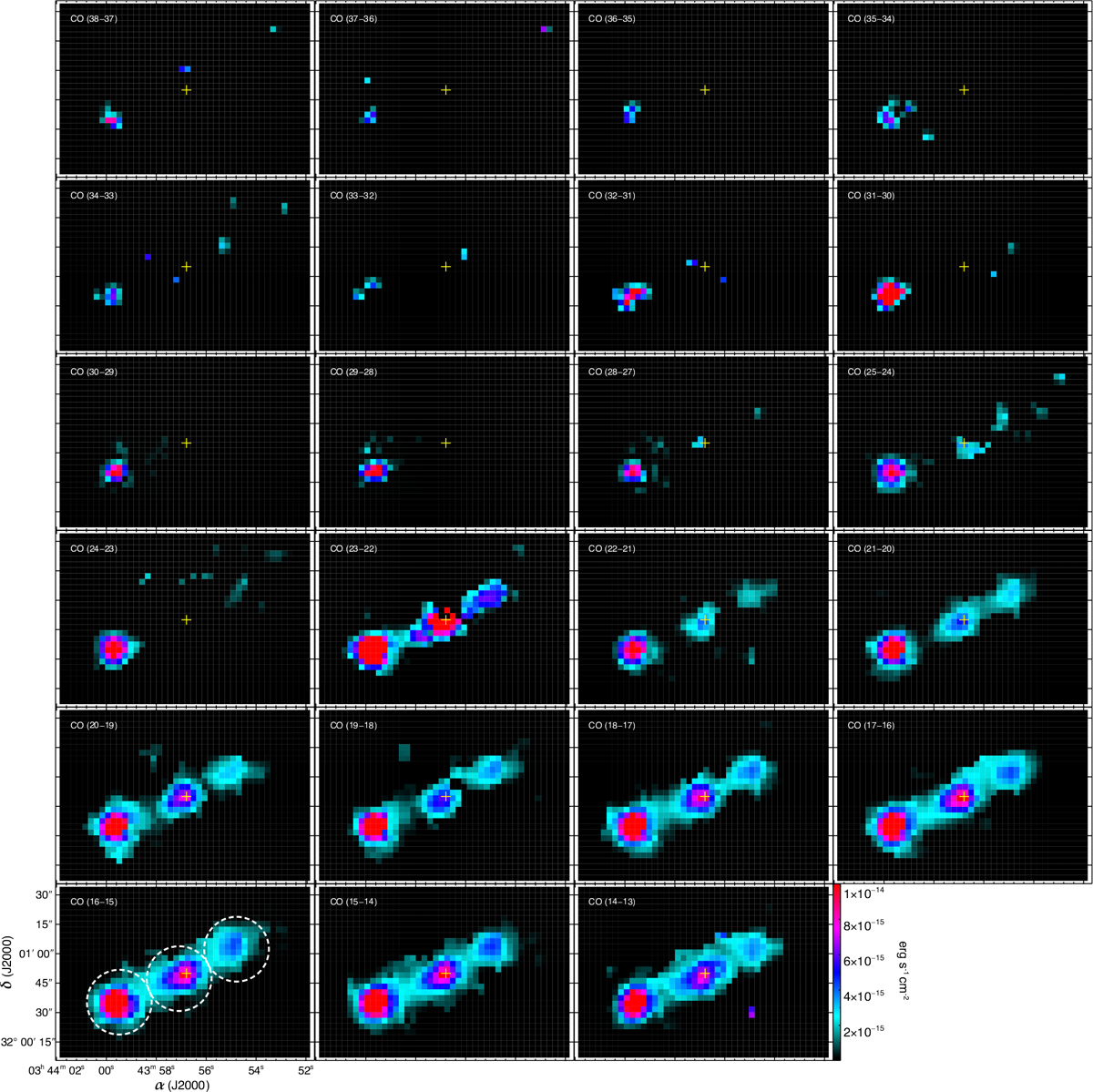