The feedback of an HC HII region on its parental molecular core. The case of core A1 in the star-forming region G24.78+0.08

Context. G24.78+0.08 is a well known high-mass star-forming region, where several molecular cores harboring OB young stellar objects are found inside a clump of size ≈1 pc. This article focuses on the most prominent of these cores, A1, where an intense hypercompact (HC) HII region has been discovered by previous observations.
Aims: Our aim is to determine the physical conditions and the kinematics of core A1, and study the interaction of the HII region with the parental molecular core.
Methods: We combine ALMA 1.4 mm high-angular resolution (≈0.''2) observations of continuum and line emission with multi-epoch Very Long Baseline Interferometry data of water 22 GHz and methanol 6.7 GHz masers. These observations allow us to study the gas kinematics on linear scales from 10 to 104 au, and to accurately map the physical conditions of the gas over core A1.
Results: The 1.4 mm continuum is dominated by free-free emission from the intense HC HII region (size ≈1000 au) observed to the North of core A1 (region A1N). Analyzing the H30α line, we reveal a fast bipolar flow in the ionized gas, covering a range of LSR velocities (VLSR) of ≈60 km s-1. The amplitude of the VLSR gradient, 22 km s-1 mpc-1, is one of the highest so far observed towards HC HII regions. Water and methanol masers are distributed around the HC HII region in A1N, and the maser three-dimensional (3D) velocities clearly indicate that the ionized gas is expanding at high speed (≥200 km s-1) into the surrounding molecular gas. The temperature distribution (in the range 100-400 K) over core A1, traced with molecular (CH3OCHO, 13CH3CN, 13CH3OH, and CH3CH2CN) transitions with level energy in the range 30 K ≤ Eu/k ≤ 300 K, reflects the distribution of shocks produced by the fast-expansion of the ionized gas of the HII region. The high-energy (550 K ≤ Eu/k ≤ 800 K) transitions of vibrationally excited CH3CN are likely radiatively pumped, and their rotational temperature can significantly differ from the kinetic temperature of the gas. Over core A1, the VLSR maps from both the 1.4 mm molecular lines and the 6.7 GHz methanol masers consistently show a VLSR gradient (amplitude ≈0.3 km s-1 mpc-1) directed approximately S-N. Rather than gravitationally supported rotation of a massive toroid, we interpret this velocity gradient as a relatively slow expansion of core A1. 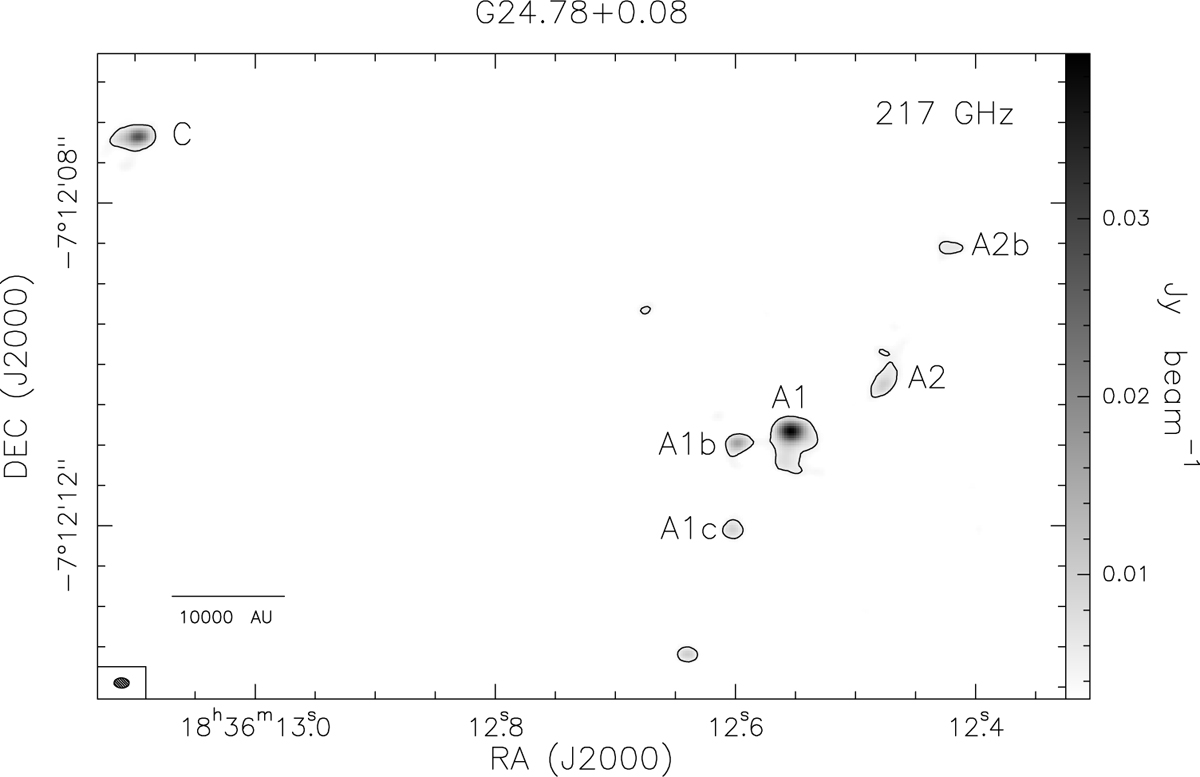