Eyes on K2-3: A system of three likely sub-Neptunes characterized with HARPS-N and HARPS

Context. M-dwarf stars are promising targets for identifying and characterizing potentially habitable planets. K2-3 is a nearby (45 pc), early-type M dwarf hosting three small transiting planets, the outermost of which orbits close to the inner edge of the stellar (optimistic) habitable zone. The K2-3 system is well suited for follow-up characterization studies aimed at determining accurate masses and bulk densities of the three planets.
Aims: Using a total of 329 radial velocity measurements collected over 2.5 years with the HARPS-N and HARPS spectrographs and a proper treatment of the stellar activity signal, we aim to improve measurements of the masses and bulk densities of the K2-3 planets. We use our results to investigate the physical structure of the planets.
Methods: We analysed radial velocity time series extracted with two independent pipelines using Gaussian process regression. We adopted a quasi-periodic kernel to model the stellar magnetic activity jointly with the planetary signals. We used Monte Carlo simulations to investigate the robustness of our mass measurements of K2-3 c and K2-3 d, and to explore how additional high-cadence radial velocity observations might improve these values.
Results: Even though the stellar activity component is the strongest signal present in the radial velocity time series, we are able to derive masses for both planet b (Mb = 6.6 ± 1.1 M⊕) and planet c (Mc = 3.1-1.2+1.3 M⊕). The Doppler signal from K2-3 d remains undetected, likely because of its low amplitude compared to the radial velocity signal induced by the stellar activity. The closeness of the orbital period of K2-3 d to the stellar rotation period could also make the detection of the planetary signal complicated. Based on our ability to recover injected signals in simulated data, we tentatively estimate the mass of K2-3 d to be Md = 2.7-0.8+1.2 M⊕ M⊕. These mass measurements imply that the bulk densities and therefore the interior structures of the three planets may be similar. In particular, the planets may either have small H/He envelopes (<1%) or massive water layers, with a water content ≥50% of their total mass, on top of rocky cores. Placing further constraints on the bulk densities of K2-3 c and d is difficult; in particular, we would not have been able to detect the Doppler signal of K2-3 d even by adopting a semester of intense, high-cadence radial velocity observations with HARPS-N and HARPS. 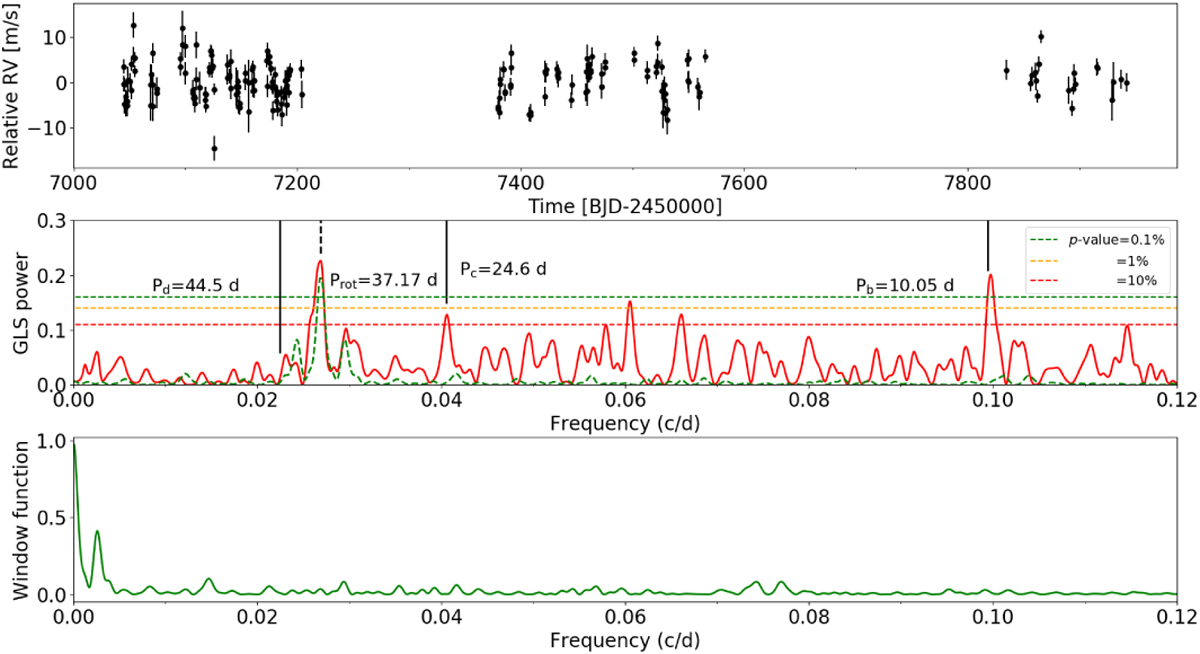