Stellar population of the superbubble N 206 in the LMC. II. Parameters of the OB and WR stars, and the total massive star feedback

Context. Clusters or associations of early-type stars are often associated with a "superbubble" of hot gas. The formation of such superbubbles is caused by the feedback from massive stars. The complex N 206 in the Large Magellanic Cloud (LMC) exhibits a superbubble and a rich massive star population.
Aims: Our goal is to perform quantitative spectral analyses of all massive stars associated with the N 206 superbubble in order to determine their stellar and wind parameters. We compare the superbubble energy budget to the stellar energy input and discuss the star formation history of the region.
Methods: We observed the massive stars in the N 206 complex using the multi-object spectrograph FLAMES at ESO's Very Large Telescope (VLT). Available ultra-violet (UV) spectra from archives are also used. The spectral analysis is performed with Potsdam Wolf-Rayet (PoWR) model atmospheres by reproducing the observations with the synthetic spectra.
Results: We present the stellar and wind parameters of the OB stars and the two Wolf-Rayet (WR) binaries in the N 206 complex. Twelve percent of the sample show Oe/Be type emission lines, although most of them appear to rotate far below critical. We found eight runaway stars based on their radial velocity. The wind-momentum luminosity relation of our OB sample is consistent with the expectations. The Hertzsprung-Russell diagram (HRD) of the OB stars reveals a large age spread (1-30 Myr), suggesting different episodes of star formation in the complex. The youngest stars are concentrated in the inner part of the complex, while the older OB stars are scattered over outer regions. We derived the present day mass function for the entire N 206 complex as well as for the cluster NGC 2018. The total ionizing photon flux produced by all massive stars in the N 206 complex is Q0 ≈ 5 × 1050 s-1, and the mechanical luminosity of their stellar winds amounts to Lmec = 1.7 × 1038 erg s-1. Three very massive Of stars are found to dominate the feedback among 164 OB stars in the sample. The two WR winds alone release about as much mechanical luminosity as the whole OB star sample. The cumulative mechanical feedback from all massive stellar winds is comparable to the combined mechanical energy of the supernova explosions that likely occurred in the complex. Accounting also for the WR wind and supernovae, the mechanical input over the last five Myr is ≈ 2.3 × 1052 erg.
Conclusions: The N206 complex in the LMC has undergone star formation episodes since more than 30 Myr ago. From the spectral analyses of its massive star population, we derive a current star formation rate of 2.2 × 10-3 M⊙ yr-1. From the combined input of mechanical energy from all stellar winds, only a minor fraction is emitted in the form of X-rays. The corresponding input accumulated over a long time also exceeds the current energy content of the complex by more than a factor of five. The morphology of the complex suggests a leakage of hot gas from the superbubble. 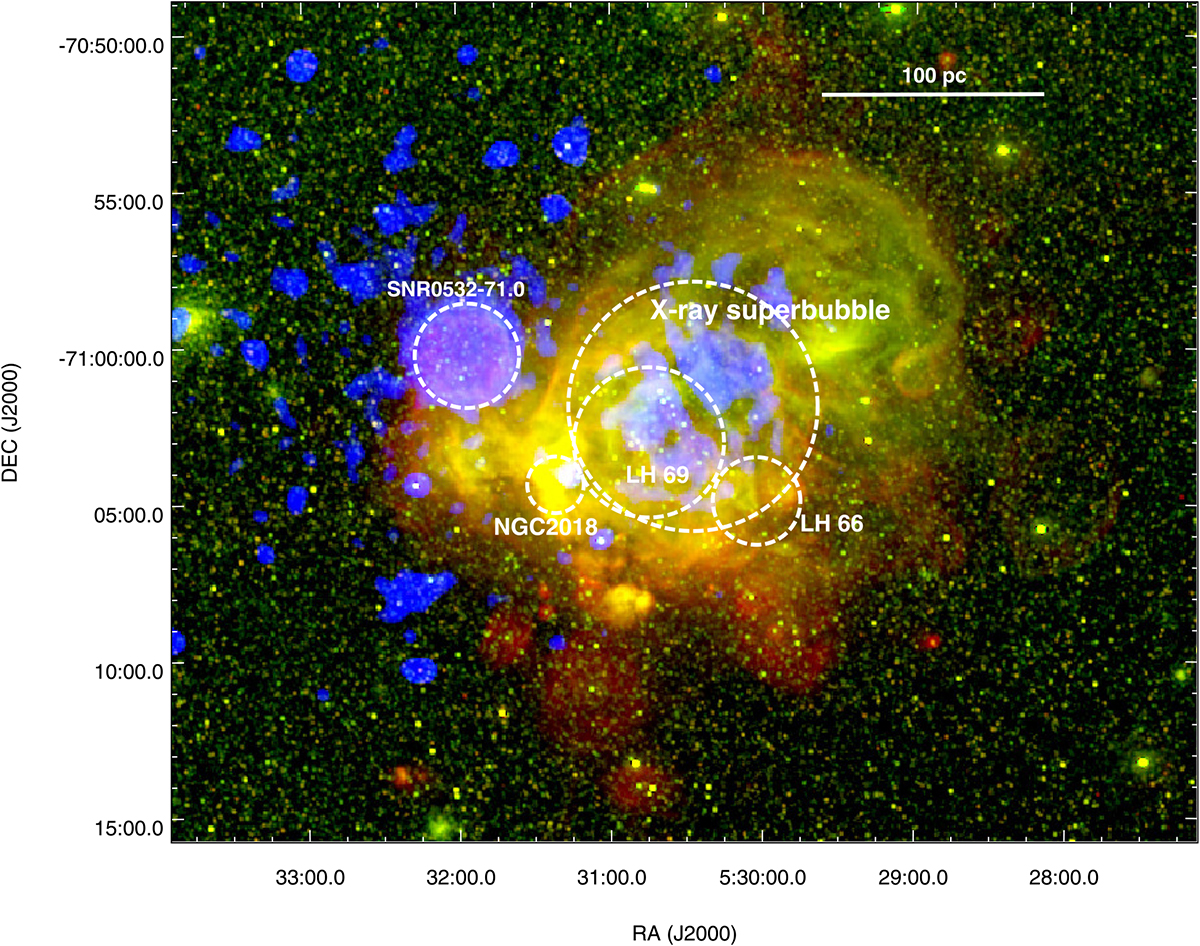