GJ 1214: Rotation period, starspots, and uncertainty on the optical slope of the transmission spectrum


Aims: Brightness inhomogeneities in the stellar photosphere (dark spots or bright regions) affect the measurements of the planetary transmission spectrum. To investigate the star spots of the M dwarf GJ 1214, we conducted a multicolor photometric monitoring from 2012 to 2016.
Methods: The time-series photometry was analyzed with the light curve inversion tool StarSim. Using the derived stellar surface properties from the light curve inversion, we modeled the impact of the star spots when unocculted by the transiting planet. We compared the photometric variability of GJ 1214 to published results of mid- to late M dwarfs from the MEarth sample.
Results: The measured variability shows a periodicity of 125 ± 5 days, which we interpret as the signature of the stellar rotation period. This value overrules previous suggestions of a significantly shorter stellar rotation period. A light curve inversion of the monitoring data yields an estimation of the flux dimming of a permanent spot filling factor not contributing to the photometric variability, a temperature contrast of the spots of 370 K and persistent active longitudes. The derived surface maps over all five seasons were used to estimate the influence of the star spots on the transmission spectrum of the planet from 400 to 2000 nm. The monitoring data presented here do not support a recent interpretation of a measured transmission spectrum of GJ 1214b as to be caused by bright regions in the stellar photosphere. Instead, we list arguments as to why the effect of dark spots likely dominated over bright regions in the period of our monitoring. Furthermore, our photometry proves an increase in variability over at least four years, indicative for a cyclic activity behavior. The age of GJ 1214 is likely between 6 and 10 Gyr.
Conclusions: The long-term photometry allows for a correction of unocculted spots. For an active star such as GJ 1214, there remains a degeneracy between occulted spots and the transit parameters used to build the transmission spectrum. This degeneracy can only be broken by high-precision transit photometry resolving the spot crossing signature in the transit light curve. 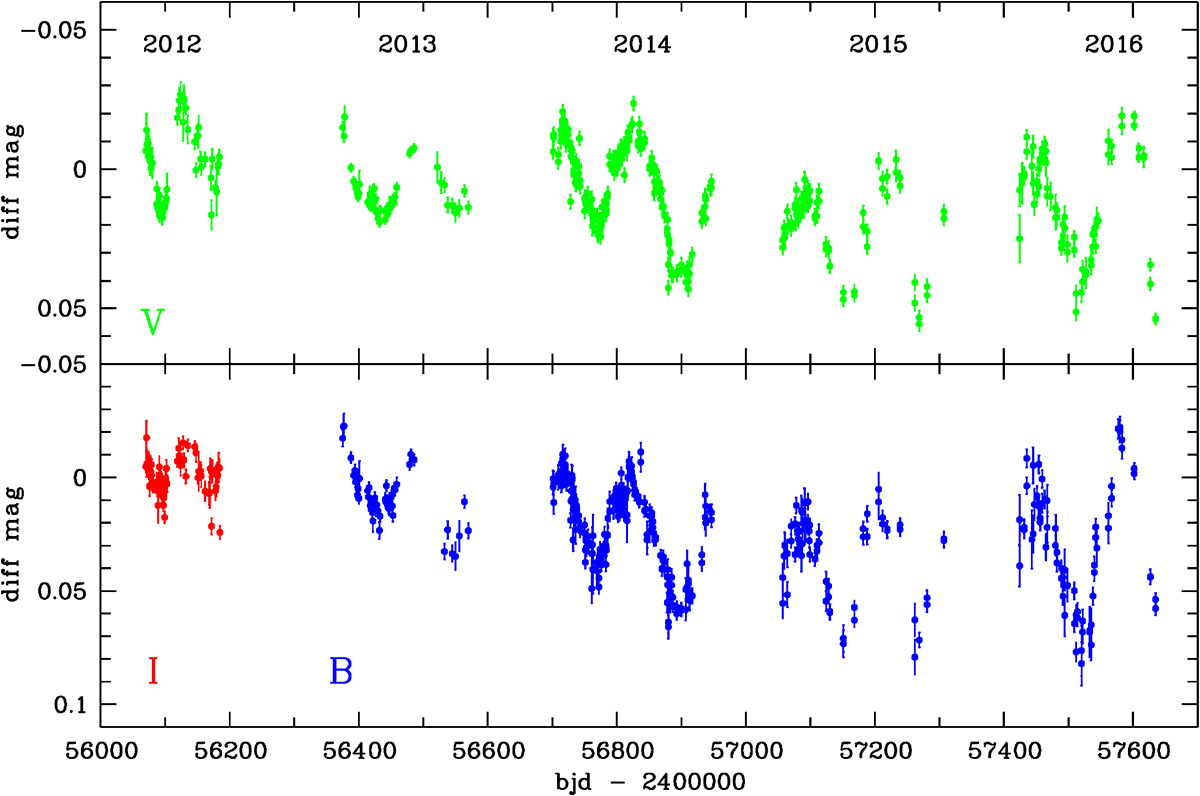