Context. The double plasma resonance (DPR) instability plays a basic role in the generation of solar radio zebras. In the plasma, consisting of the loss-cone type distribution of hot electrons and much denser and colder background plasma, this instability generates the upper-hybrid waves, which are then transformed into the electromagnetic waves and observed as radio zebras.
Aims: In the present paper we numerically study the double plasma resonance instability from the point of view of the zebra interpretation.
Methods: We use a 3-dimensional electromagnetic particle-in-cell (3D PIC) relativistic model. We use this model in two versions: (a) a spatially extended "multi-mode" model and (b) a spatially limited "specific-mode" model. While the multi-mode model is used for detailed computations and verifications of the results obtained by the "specific-mode" model, the specific-mode model is used for computations in a broad range of model parameters, which considerably save computational time. For an analysis of the computational results, we developed software tools in Python.
Results: First using the multi-mode model, we study details of the double plasma resonance instability. We show how the distribution function of hot electrons changes during this instability. Then we show that there is a very good agreement between results obtained by the multi-mode and specific-mode models, which is caused by a dominance of the wave with the maximal growth rate. Therefore, for computations in a broad range of model parameters, we use the specific-mode model. We compute the maximal growth rates of the double plasma resonance instability with a dependence on the ratio between the upper-hybrid ωUH and electron-cyclotron ωce frequency. We vary temperatures of both the hot and background plasma components and study their effects on the resulting growth rates. The results are compared with the analytical ones. We find a very good agreement between numerical and analytical growth rates. We also compute saturation energies of the upper-hybrid waves in a very broad range of parameters. We find that the saturation energies of the upper-hybrid waves show maxima and minima at almost the same values of ωUH/ωce as the growth rates, but with a higher contrast between them than the growth rate maxima and minima. The contrast between saturation energy maxima and minima increases when the temperature of hot electrons increases. Furthermore, we find that the saturation energy of the upper-hybrid waves is proportional to the density of hot electrons. The maximum saturated energy can be up to one percent of the kinetic energy of hot electrons. Finally we find that the saturation energy maxima in the interval of ωUH/ωce = 3-18 decrease according to the exponential function. All these findings can be used in the interpretation of solar radio zebras. 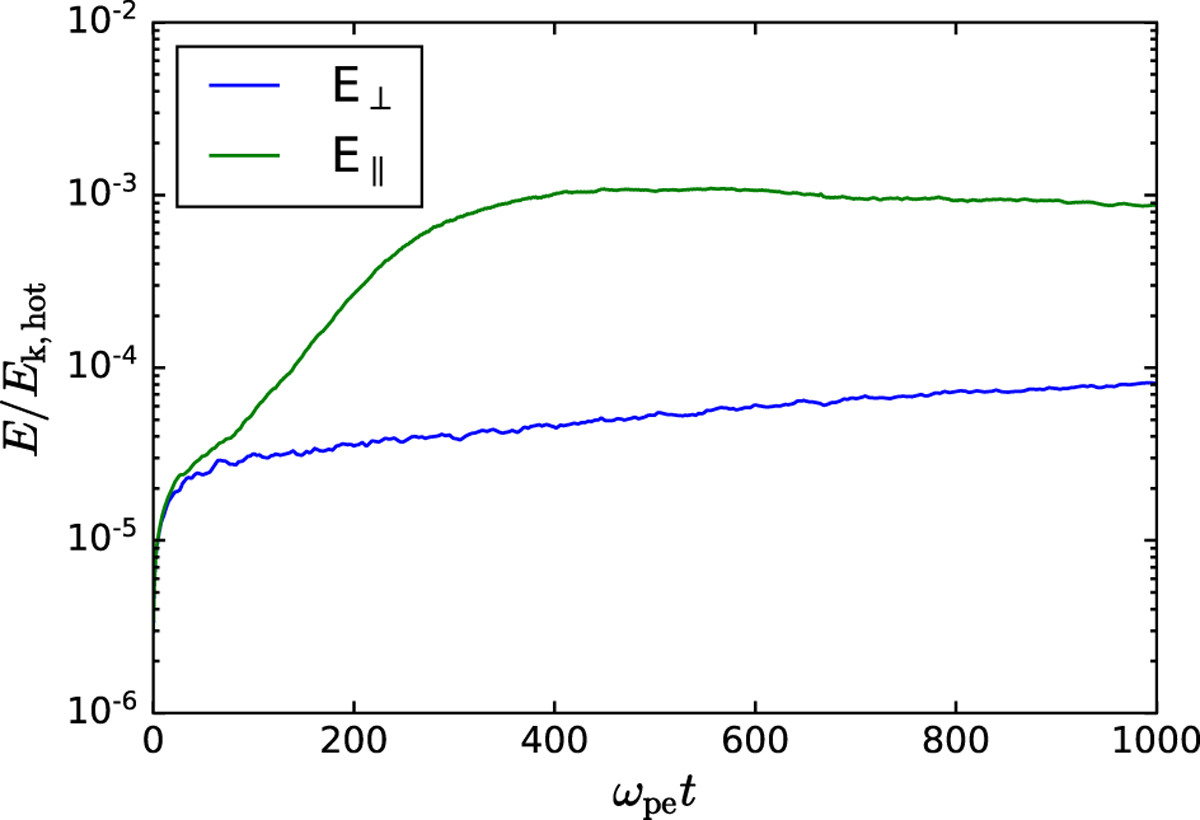