Short-term variability and mass loss in Be stars. III. BRITE and SMEI satellite photometry of 28 Cygni

Context. Be stars are important reference laboratories for the investigation of viscous Keplerian discs. In some cases, the disc feeder mechanism involves a combination of non-radial pulsation (NRP) modes.
Aims: We seek to understand whether high-cadence photometry can shed further light on the role of NRP modes in facilitating rotation-supported mass loss.
Methods: The BRITE-Constellation of nanosatellites obtained mmag photometry of 28 Cygni for 11 months in 2014-2016. We added observations with the Solar Mass Ejection Imager (SMEI) in 2003-2010 and 118 Hα line profiles, half of which were from 2016.
Results: For decades, 28 Cyg has exhibited four large-amplitude frequencies: two closely spaced frequencies of spectroscopically confirmed g modes near 1.5 c/d, one slightly lower exophotospheric (Štefl) frequency, and at 0.05 c/d the difference (∆) frequency between the two g modes. This top-level framework is indistinguishable from η Cen (Paper I), which is also very similar in spectral type, rotation rate, and viewing angle. The circumstellar (Štefl) frequency alone does not seem to be affected by the ∆ frequency. The amplitude of the ∆ frequency undergoes large variations; around maximum the amount of near-circumstellar matter is increased and the amplitude of the Štefl frequency grows by a factor of a few. During such brightenings dozens of transient spikes appear in the frequency spectrum; these spikes are concentrated into three groups. Only 11 frequencies were common to all years of BRITE observations.
Conclusions: Be stars seem to be controlled by several coupled clocks, most of which are not very regular on timescales of weeks to months but function for decades. The combination of g modes to the slow ∆ variability and/or the atmospheric response to it appears significantly non-linear. As in η Cen, the ∆ variability seems to be mainly responsible for the modulation of the star-to-disc mass transfer in 28 Cyg. A hierarchical set of ∆ frequencies may reach the longest known timescales of the Be phenomenon.

Based in part on data collected by the BRITE-Constellation satellite mission, built, launched and operated thanks to support from the Austrian Aeronautics and Space Agency and the University of Vienna, the Canadian Space Agency (CSA), and the Foundation for Polish Science & Technology (FNiTP MNiSW) and National Science Centre (NCN).Full Tables 2-4 and detrended light curves are only available at the CDS via anonymous ftp to http://cdsarc.u-strasbg.fr (http://130.79.128.5) or via http://cdsarc.u-strasbg.fr/viz-bin/qcat?J/A+A/610/A70 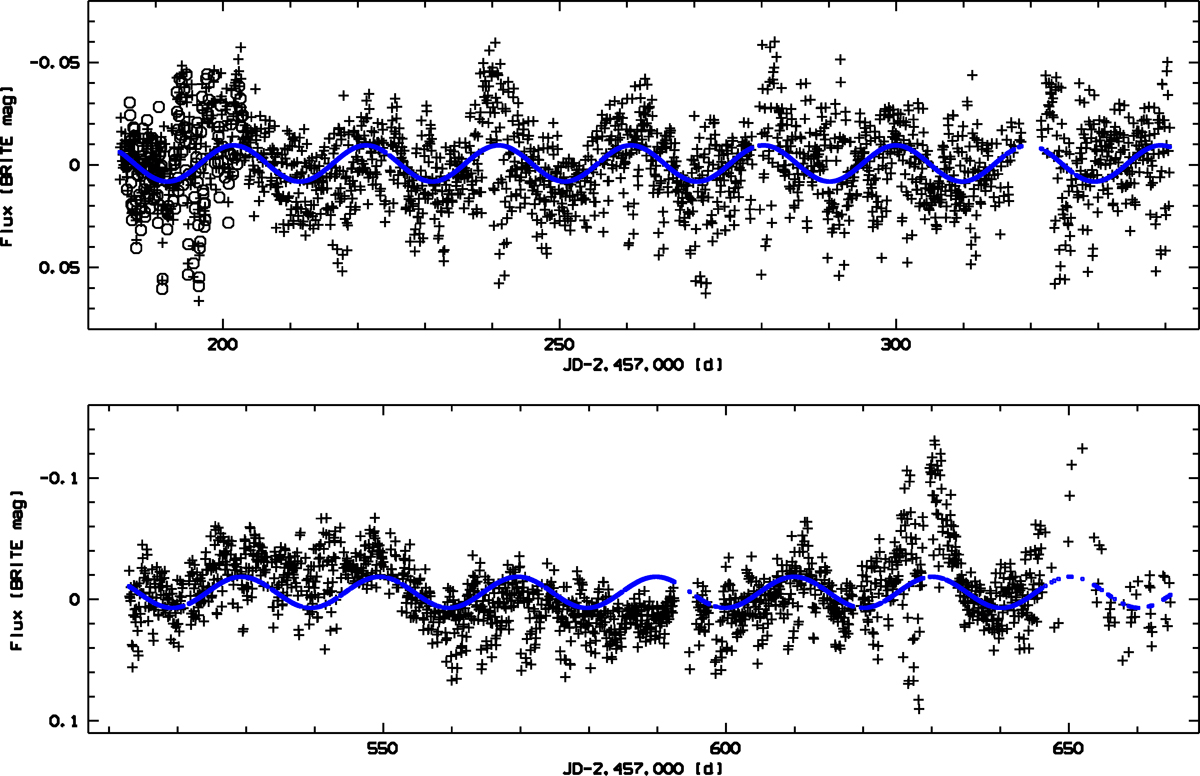