Jets and outflows of massive protostars. From cloud collapse to jet launching and cloud dispersal

Context. Massive stars live short but intense lives. While less numerous than low-mass stars, they enormously impact their surroundings by several feedback mechanisms. They form in opaque and far-away regions of the galaxy, such that one of these feedback mechanisms also becomes a record of their evolution: their bright large-scale jets and outflows.
Aims: In a comprehensive convergence study, we investigate the computational conditions necessary to resolve (pseudo-) disk formation and jet-launching processes, and analyze possible caveats. We explore the magneto-hydrodynamic (MHD) processes of the collapse of massive prestellar cores in detail, including an analysis of the forces involved and their temporal evolution for up to two free-fall times.
Methods: We conduct MHD simulations using the state-of-the-art code PLUTO, combining nonideal MHD, self-gravity, and very high resolutions as they have never been achieved before. Our setup includes a 100 M⊙ cloud core that collapses under its own self-gravity to self-consistently form a dense disk structure and launch tightly collimated magneto-centrifugal jets and wide-angle tower flows.
Results: We show a comprehensive evolutionary picture of the collapse of a massive prestellar core with a detailed analysis of the physical processes involved and our high-resolution simulations can resolve a magneto-centrifugal jet and a magnetic pressure-driven outflow, separately. The nature of the outflows depends critically on spatial resolution. Only high-resolution simulations are able to differentiate a magneto-centrifugally launched, highly collimated jet from a slow wide-angle magnetic-pressure-driven tower flow. Of these two outflow components, the tower flow dominates angular-momentum transport. The mass outflow rate is dominated by the entrained material from the interaction of the jet with the stellar environment and only part of the ejected medium is directly launched from the accretion disk. A tower flow can only develop to its full extent when much of the original envelope has already dispersed. Taking into account both the mass launched from the surface of the disk and the entrained material from the envelope, we find an ejection-to-accretion efficiency of 10%. Nonideal MHD is required to form centrifugally supported accretion disks and the disk size is strongly dependent on spatial resolution. A converged result for disk and both outflow components requires a spatial resolution of Δx ≤ 0.17 au at 1 au and sink-cell sizes ≤3.1 au.
Conclusions: Massive stars not only possess slow wide-angle tower flows, but also produce magneto-centrifugal jets, just as their low-mass counterparts. The actual difference between low-mass and high-mass star formation lies in the "embeddedness" of the high-mass star which implies that the jet and tower flow interact with the infalling large-scale stellar environment, potentially resulting in entrainment. 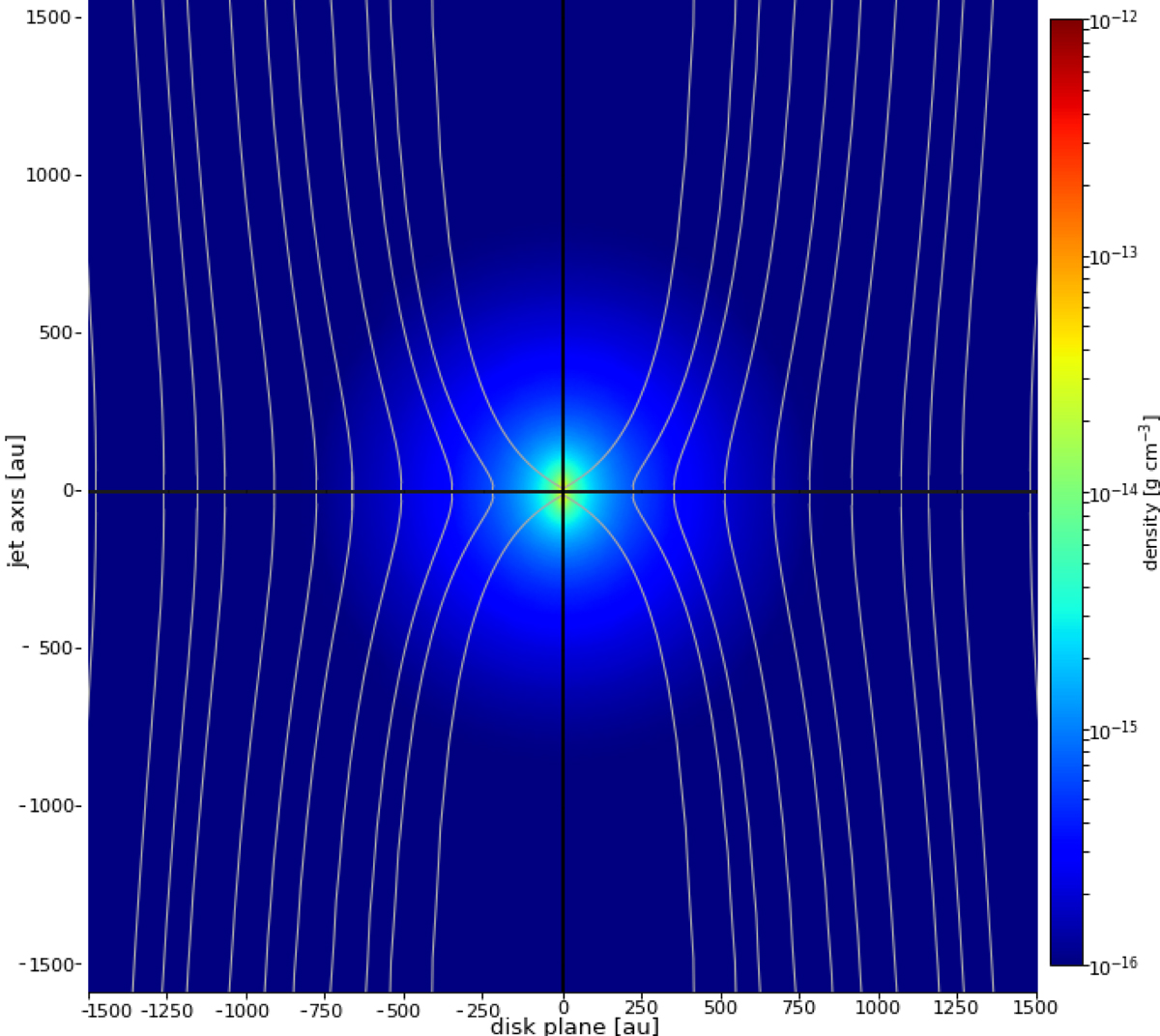