The Fornax Deep Survey with the VST. IV. A size and magnitude limited catalog of dwarf galaxies in the area of the Fornax cluster

Context. The Fornax Deep Survey (FDS), an imaging survey in the u', g', r', and i'-bands, has a supreme resolution and image depth compared to the previous spatially complete Fornax Cluster Catalog (FCC). Our new data allows us to study the galaxies down to r'-band magnitude mr' ≈ 21 mag (Mr' ≈ -10.5 mag), which opens a new parameter regime to investigate the evolution of dwarf galaxies in the cluster environment. After the Virgo cluster, Fornax is the second nearest galaxy cluster to us, and with its different mass and evolutionary state, it provides a valuable comparison that makes it possible to understand the various evolutionary effects on galaxies and galaxy clusters. These data provide an important legacy dataset to study the Fornax cluster.
Aims: We aim to present the Fornax Deep Survey (FDS) dwarf galaxy catalog, focusing on explaining the data reduction and calibrations, assessing the quality of the data, and describing the methods used for defining the cluster memberships and first order morphological classifications for the catalog objects. We also describe the main scientific questions that will be addressed based on the catalog. This catalog will also be invaluable for future follow-up studies of the Fornax cluster dwarf galaxies.
Methods: As a first step we used the SExtractor fine-tuned for dwarf galaxy detection, to find galaxies from the FDS data, covering a 26 deg2 area of the main cluster up to its virial radius, and the area around the Fornax A substructure. We made 2D-decompositions of the identified galaxies using GALFIT, measure the aperture colors, and the basic morphological parameters like concentration and residual flux fraction. We used color-magnitude, luminosity-radius and luminosity-concentration relations to separate the cluster galaxies from the background galaxies. We then divided the cluster galaxies into early- and late-type galaxies according to their morphology and gave first order morphological classifications using a combination of visual and parametric classifications.
Results: Our final catalog includes 14 095 galaxies. We classify 590 galaxies as being likely Fornax cluster galaxies, of which 564 are dwarfs (Mr' > -18.5 mag) consisting our Fornax dwarf catalog. Of the cluster dwarfs we classify 470 as early-types, and 94 as late-type galaxies. Our final catalog reaches its 50% completeness limit at magnitude Mr' = -10.5 mag and surface brightness μ¯e,r' = 26 mag arcsec-2, which is approximately three magnitudes deeper than the FCC. Based on previous works and comparison with a spectroscopically confirmed subsample, we estimate that our final Fornax dwarf galaxy catalog has ≲10% contamination from the background objects. 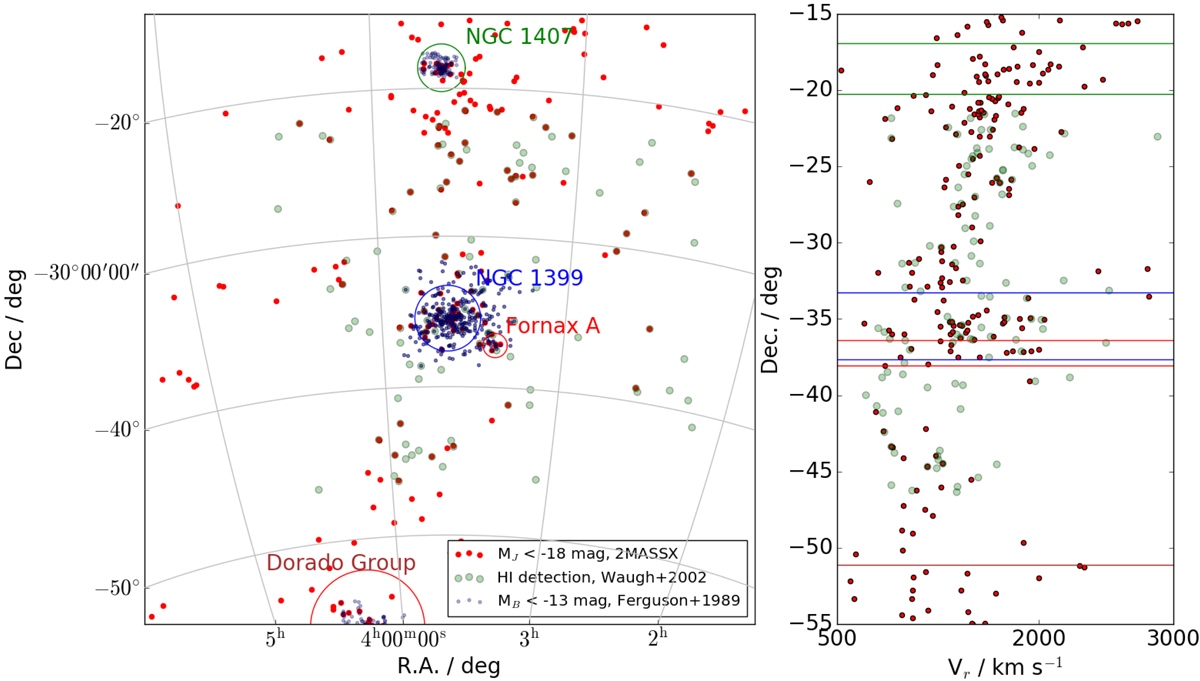