Deep XMM-Newton observations of the northern disc of M 31. I. Source catalogue

Context. We carried out new observations of two fields in the star-forming northern ring of M 31 with XMM-Newton with each one of them consisting of two exposures of about 100 ks each. A previous XMM-Newton survey of the entire M 31 galaxy revealed extended diffuse X-ray emission in these regions.
Aims: We study the population of X-ray sources in the northern disc of M 31 by compiling a complete list of X-ray sources down to a sensitivity limit of ∼7 × 1034 erg s-1 (0.5-2.0 keV) and improve the identification of the X-ray sources. The major objective of the observing programme was the study of the hot phase of the interstellar medium (ISM) in M 31. The analysis of the diffuse emission and the study of the ISM is presented in a separate paper.
Methods: We analysed the spectral properties of all detected sources using hardness ratios and spectra if the statistics were high enough. We also checked for variability. In order to classify the sources detected in the new deep XMM-Newton observations, we cross-correlated the source list with the source catalogue of a new survey of the northern disc of M 31 carried out with the Chandra X-ray Observatory and the Hubble Space Telescope (Panchromatic Hubble Andromeda Treasury, PHAT) as well as with other existing catalogues.
Results: We detected a total of 389 sources in the two fields of the northern disc of M 31 observed with XMM-Newton. We identified 43 foreground stars and candidates and 50 background sources. Based on a comparison with the results of the Chandra/PHAT survey, we classify 24 hard X-ray sources as new candidates for X-ray binaries. In total, we identified 34 X-ray binaries and candidates and 18 supernova remnants (SNRs) and candidates. We studied the spectral properties of the four brightest SNRs and confirmed five new X-ray SNRs. Three of the four SNRs, for which a spectral analysis was performed, show emission mainly below 2 keV, which is consistent with shocked ISM. The spectra of two of them also require an additional component with a higher temperature. The SNR [SPH11] 1535 has a harder spectrum and might suggest that there is a pulsar-wind nebula inside the SNR. For all SNRs in the observed fields, we measured the X-ray flux or calculated upper limits. We also carried out short-term and long-term variability studies of the X-ray sources and found five new sources showing clear variability. In addition, we studied the spectral properties of the transient source SWIFT J004420.1+413702, which shows significant variation in flux over a period of seven months (June 2015 to January 2016) and associated change in absorption. Based on the likely optical counterpart detected in the Chandra/PHAT survey, the source is classified as a low-mass X-ray binary. 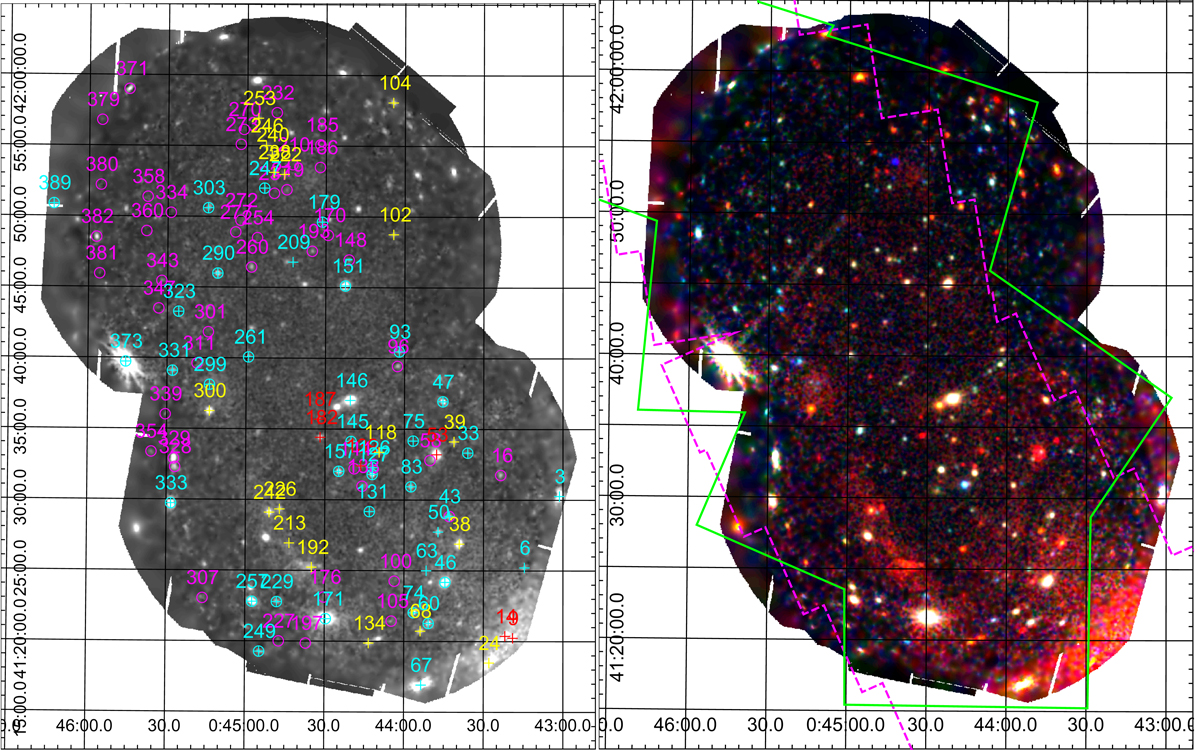