Context. Eruptions from coronal bright points (CBPs) are investigated in a two-part study.
Aims: The present study aims to explore in full detail the morphological and dynamical evolution of these eruptions in the context of the full lifetime evolution of CBPs. A follow-up study employs data-driven modelling based on a relaxation code to reproduce the time evolution of the magnetic field of these eruptive CBPs, and provide insight into the possible causes for destabilisation and eruption.
Methods: Observations of the full lifetime of CBPs in data taken with the Atmospheric Imaging Assembly (AIA) on board the Solar Dynamics Observatory in four passbands, He II 304 Å, Fe IX/X 171 Å, Fe XII 193 Å, and Fe XVIII 94 Å are investigated for the occurrence of plasma ejections, micro-flaring, mini-filament eruptions, and mini coronal-mass ejections (mini-CMEs). Data from the Helioseismic and Magnetic Imager are analysed to study the longitudinal photospheric magnetic field evolution associated with the CBPs and related eruptions.
Results: First and foremost, our study shows that the majority (76%) of quiet Sun CBPs (31 out of 42 CBPs) produce at least one eruption during their lifetime. From 21 eruptions in 11 CBPs, 18 of them occur, on average, ∼17 h after the CBP formation. The average lifetime of the CBPs in AIA 193 Å is ∼21 h. The time delay in the eruption occurrence coincides in each CBP with the convergence and cancellation phase of the CBP bipole evolution during which the CBPs become smaller until they fully disappear. The remaining three eruptions happen 4-6 h after the CBP formation. In 16 out of the 21 eruptions, the magnetic convergence and cancellation involve the CBP main bipoles, while in three eruptions, one of the BP magnetic fragments and a pre-existing fragment of opposite polarity converge and cancel. In one BP with two eruptions, cancellation was not observed. The CBP eruptions involve in most cases the expulsion of chromospheric material either as an elongated filamentary structure (mini-filament, MF) or a volume of cool material (cool plasma cloud, CPC), together with the CBP or higher overlying hot loops. Coronal waves were identified during three eruptions. A micro-flaring is observed beneath all erupting MFs/CPCs. Whether the destabilised MF causes the micro-flaring or the destabilisation and eruption of the MF is triggered by reconnection beneath the filament remains uncertain. In most eruptions, the cool erupting plasma either partially or fully obscures the micro-flare until the erupting material moves away from the CBP. From 21 eruptions, 11 are found to produce mini-CMEs. The dimming regions associated with the CMEs are found to be occupied by both the "dark" cool plasma and areas of weakened coronal emission caused by the depleted plasma density.
Conclusions: The present study demonstrates that the small-scale loop structures in the quiet Sun, the evolution of which is determined by their magnetic footpoint motions and/or ambient field topology, evolve into an eruptive phase that triggers the ejection of cool and hot plasma in the corona. 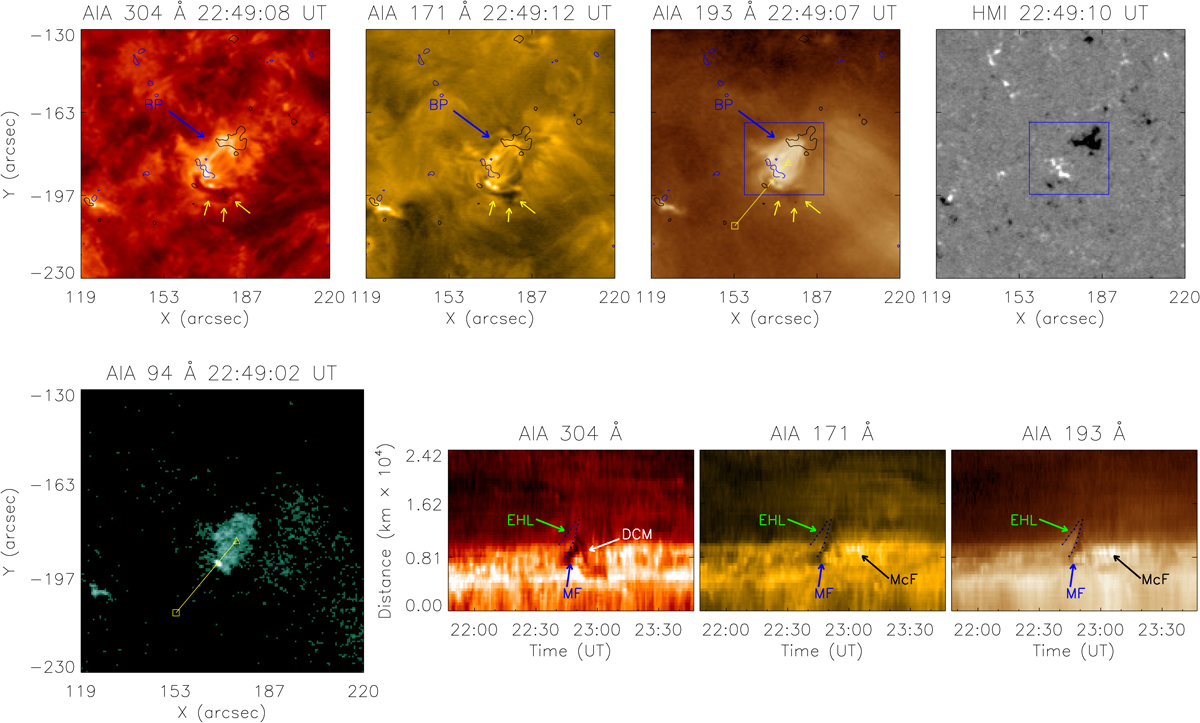