The starburst galaxy NGC 253 revisited by H.E.S.S. and Fermi-LAT

Context. NGC 253 is one of only two starburst galaxies found to emit γ-rays from hundreds of MeV to multi-TeV energies. Accurate measurements of the very-high-energy (VHE; E > 100 GeV) and high-energy (HE; E > 60 MeV) spectra are crucial to study the underlying particle accelerators, probe the dominant emission mechanism(s) and to study cosmic-ray interaction and transport.
Aims: The measurement of the VHE γ-ray emission of NGC 253 published in 2012 by H.E.S.S. was limited by large systematic uncertainties. Here, the most up to date measurement of the γ-ray spectrum of NGC 253 is investigated in both HE and VHE γ-rays. Assuming a hadronic origin of the γ-ray emission, the measurement uncertainties are propagated into the interpretation of the accelerated particle population.
Methods: The data of H.E.S.S. observations are reanalysed using an updated calibration and analysis chain. The improved Fermi-LAT analysis employs more than 8 yr of data processed using pass 8. The cosmic-ray particle population is evaluated from the combined HE-VHE γ-ray spectrum using NAIMA in the optically thin case.
Results: The VHE γ-ray energy spectrum is best fit by a power-law distribution with a flux normalisation of (1.34 ± 0.14stat ± 0.27sys) × 10-13 cm-2 s-1 TeV1 at 1 TeV - about 40% above, but compatible with the value obtained in Abramowski et al. (2012). The spectral index Γ = 2.39 ± 0.14stat ± 0.25sys is slightly softer than but consistent with the previous measurement within systematic errors. In the Fermi energy range an integral flux of F(E > 60 MeV) = (1.56 ± 0.28stat ± 0.15sys) × 10-8 cm-2 s-1 is obtained. At energies above ∼3 GeV the HE spectrum is consistent with a power-law ranging into the VHE part of the spectrum measured by H.E.S.S. with an overall spectral index Γ = 2.22 ± 0.06stat.
Conclusions: Two scenarios for the starburst nucleus are tested, in which the gas in the starburst nucleus acts as either a thin or a thick target for hadronic cosmic rays accelerated by the individual sources in the nucleus. In these two models, the level to which NGC 253 acts as a calorimeter is estimated to a range of fcal = 0.1 to 1 while accounting for the measurement uncertainties. The presented spectrum is likely to remain the most accurate measurements until the Cherenkov Telescope Array (CTA) has collected a substantial set of data towards NGC 253. 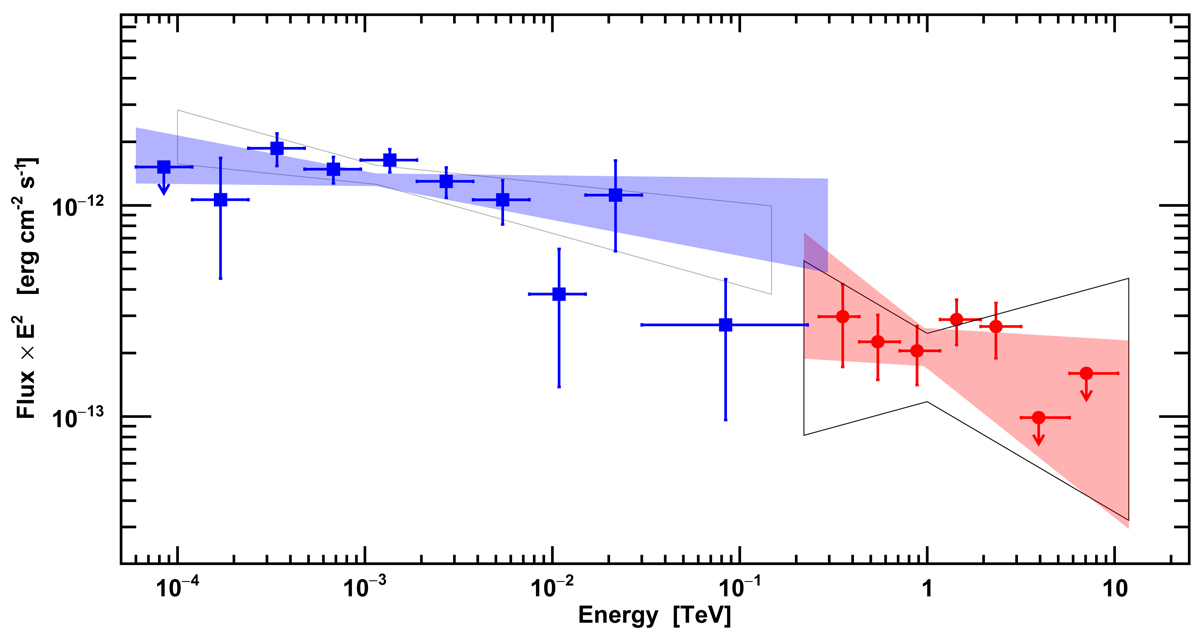