Context. NGC 3105 is a young open cluster hosting blue, yellow, and red supergiants. This rare combination makes it an excellent laboratory for constraining evolutionary models of high-mass stars. It has been poorly studied, and the fundamental parameters such as its age or distance are not well defined.
Aims: We intend to characterise in an accurate way the cluster and its evolved stars, for which we derive for the first time atmospheric parameters and chemical abundances.
Methods: We performed a complete analysis combining UBVR photometry with spectroscopy. We obtained spectra with classification purposes for 14 blue stars and high-resolution spectroscopy for an in-depth analysis of the six other evolved stars.
Results: We identify 126 B-type likely members within a radius of 2.7 ± 0.6 arcmin, which implies an initial mass, Mcl ≈ 4100 M⊙. We find a distance of 7.2 ± 0.7 kpc for NGC 3105, placing it at RGC = 10.0 ± 1.2 kpc. Isochrone fitting supports an age of 28 ± 6 Ma, implying masses around 9.5 M⊙ for the supergiants. A high fraction of Be stars (≈25%) is found at the top of the main sequence down to spectral type b3. From the spectral analysis we estimate for the cluster an average νrad = +46.9 ± 0.9 km s-1 and a low metallicity, [Fe/H] = -0.29 ± 0.22. We also have determined, for the first time, chemical abundances for Li, O, Na, Mg, Si, Ca, Ti, Ni, Rb, Y, and Ba for the evolved stars. The chemical composition of the cluster is consistent with that of the Galactic thin disc. An overabundance of Ba is found, supporting the enhanced s-process.
Conclusions: NGC 3105 has a low metallicity for its Galactocentric distance, comparable to typical LMC stars. It is a valuable spiral tracer in a very distant region of the Carina-Sagittarius spiral arm, a poorly known part of the Galaxy. As one of the few Galactic clusters containing blue, yellow, and red supergiants, it is massive enough to serve as a test bed for theoretical evolutionary models close to the boundary between intermediate- and high-mass stars.

This research is partially based on observations made with the New Technology Telescope under programme 090.D-0302(A) and the MPG/ESO 2.2 m Telescope under programme 095.A-9020(A). Both telescopes are operated at La Silla Observatory (Chile) by the European Southern Observatory.Full Tables A.1 and A.2 are only available at the CDS via anonymous ftp to http://cdsarc.u-strasbg.fr (ftp://130.79.128.5) or via http://cdsarc.u-strasbg.fr/viz-bin/qcat?J/A+A/616/A124 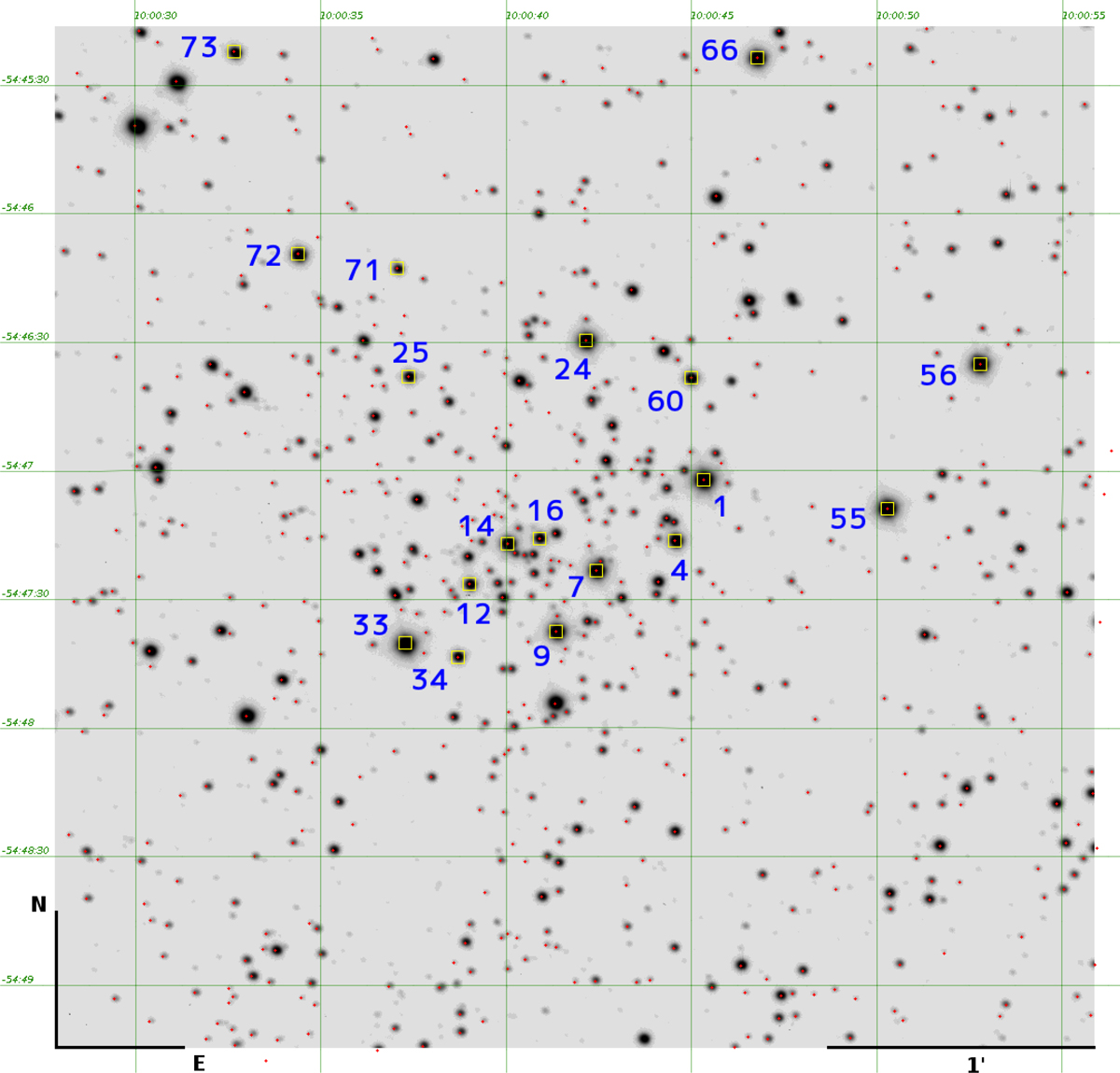