Constraints on particle acceleration in SS433/W50 from MAGIC and H.E.S.S. observations

Context. The large jet kinetic power and non-thermal processes occurring in the microquasar SS 433 make this source a good candidate for a very high-energy (VHE) gamma-ray emitter. Gamma-ray fluxes above the sensitivity limits of current Cherenkov telescopes have been predicted for both the central X-ray binary system and the interaction regions of SS 433 jets with the surrounding W50 nebula. Non-thermal emission at lower energies has been previously reported, indicating that efficient particle acceleration is taking place in the system. Aim. We explore the capability of SS 433 to emit VHE gamma rays during periods in which the expected flux attenuation due to periodic eclipses (Porb 13.1 days) and precession of the circumstellar disk (Ppre 162 days) periodically covering the central binary system is expected to be at its minimum. The eastern and western SS 433/W50 interaction regions are also examined using the whole data set available. We aim to constrain some theoretical models previously developed for this system with our observations.
Methods: We made use of dedicated observations from the Major Atmospheric Gamma Imaging Cherenkov telescopes (MAGIC) and High Energy Spectroscopic System (H.E.S.S.) of SS 433 taken from 2006 to 2011. These observation were combined for the first time and accounted for a total effective observation time of 16.5 h, which were scheduled considering the expected phases of minimum absorption of the putative VHE emission. Gamma-ray attenuation does not affect the jet/medium interaction regions. In this case, the analysis of a larger data set amounting to 40-80 h, depending on the region, was employed.
Results: No evidence of VHE gamma-ray emission either from the central binary system or from the eastern/western interaction regions was found. Upper limits were computed for the combined data set. Differential fluxes from the central system are found to be ≲ 10-12-10-13 TeV-1 cm-2 s-1 in an energy interval ranging from few × 100 GeV to few TeV. Integral flux limits down to 10-12-10-13 ph cm-2 s-1 and 10-13-10-14 ph cm-2 s-1 are obtainedat 300 and 800 GeV, respectively. Our results are used to place constraints on the particle acceleration fraction at the inner jetregions and on the physics of the jet/medium interactions.
Conclusions: Our findings suggest that the fraction of the jet kinetic power that is transferred to relativistic protons must be relatively small in SS 433, qp ≤ 2.5 × 10-5, to explain the lack of TeV and neutrino emission from the central system. At the SS 433/W50 interface, the presence of magnetic fields ≳10 μG is derived assuming a synchrotron origin for the observed X-ray emission. This also implies the presence of high-energy electrons with Ee- up to 50 TeV, preventing an efficient production of gamma-ray fluxes in these interaction regions. 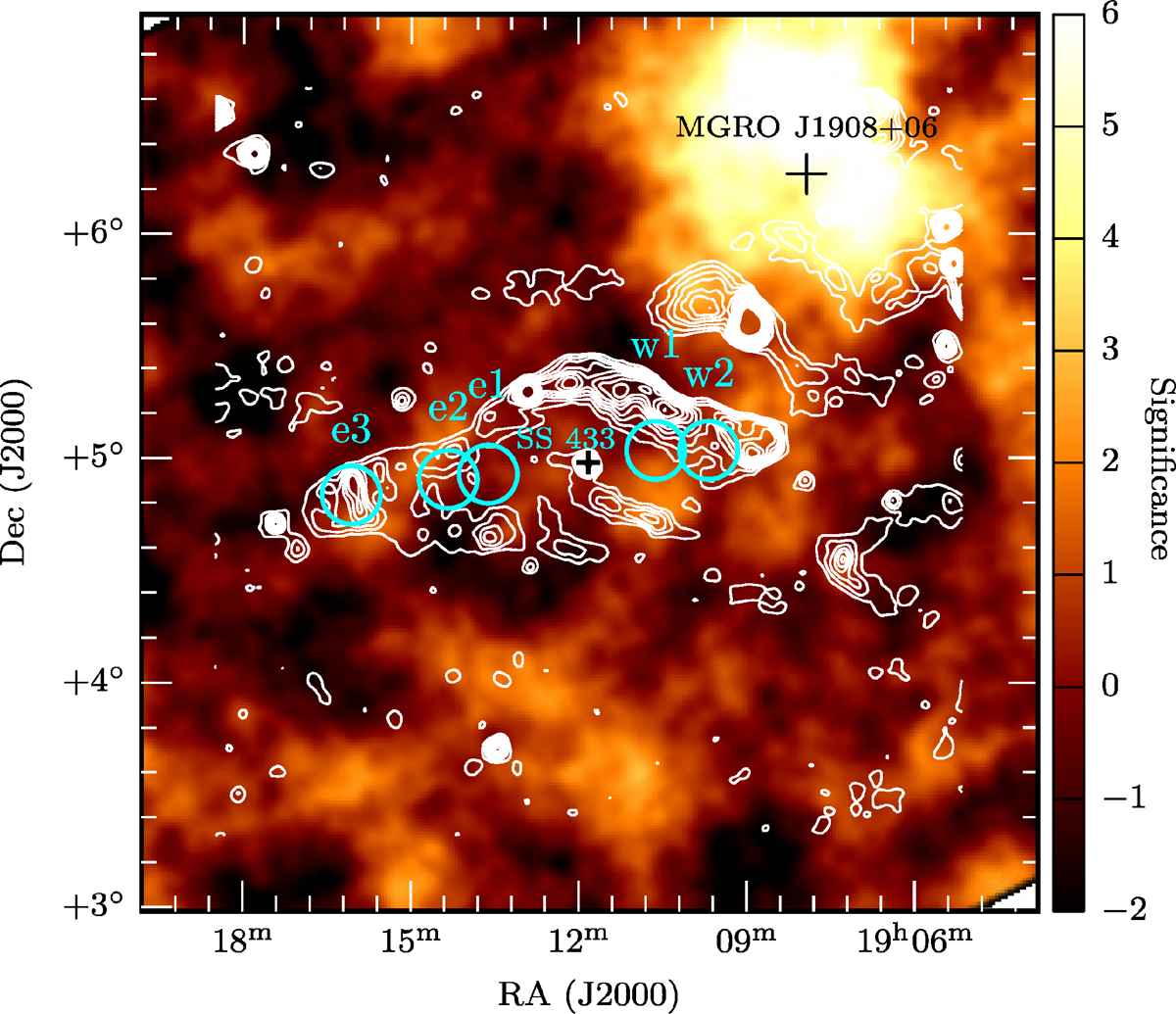