Connection between jets, winds and accretion in T Tauri stars. The X-shooter view

Mass loss from jets and winds is a key ingredient in the evolution of accretion discs in young stars. While slow winds have been recently extensively studied in T Tauri stars, little investigation has been devoted on the occurrence of high velocity jets and on how the two mass-loss phenomena are connected with each other, and with the disc mass accretion rates. In this framework, we have analysed the [O I]6300 Å line in a sample of 131 young stars with discs in the Lupus, Chamaeleon and σ Orionis star forming regions. The stars were observed with the X-shooter spectrograph at the Very Large Telescope and have mass accretion rates spanning from 10-12 to 10-7M☉ yr-1. The line profile was deconvolved into a low velocity component (LVC, | Vr | < 40 km s-1) and a high velocity component (HVC, | Vr | > 40 km s-1), originating from slow winds and high velocity jets, respectively. The LVC is by far the most frequent component, with a detection rate of 77%, while only 30% of sources have a HVC. The fraction of HVC detections slightly increases (i.e. 39%) in the sub-sample of stronger accretors (i.e. with log (Lacc/L☉) >-3). The [O I]6300 Å luminosity of both the LVC and HVC, when detected, correlates with stellar and accretion parameters of the central sources (i.e. L∗, M∗, Lacc, Ṁacc), with similar slopes for the two components. The line luminosity correlates better (i.e. has a lower dispersion) with the accretion luminosity than with the stellar luminosity or stellar mass. We suggest that accretion is the main drivers for the line excitation and that MHD disc-winds are at the origin of both components. In the sub-sample of Lupus sources observed with ALMA a relationship is found between the HVC peak velocity and the outer disc inclination angle, as expected if the HVC traces jets ejected perpendicularly to the disc plane. Mass ejection rates (Ṁjet) measured from the detected HVC [O I]6300 Å line luminosity span from 10-13 to 10-7M☉ yr-1. The corresponding Ṁjet/Ṁacc ratio ranges from 0.01 to 0.5, with an average value of 0.07. However, considering the upper limits on the HVC, we infer a Ṁjet/Ṁacc ratio < 0.03 in more than 40% of sources. We argue that most of these sources might lack the physical conditions needed for an efficient magneto-centrifugal acceleration in the star-disc interaction region. Systematic observations of populations of younger stars, that is, class 0/I, are needed to explore how the frequency and role of jets evolve during the pre-main sequence phase. This will be possible in the near future thanks to space facilities such as the James Webb space telescope (JWST). 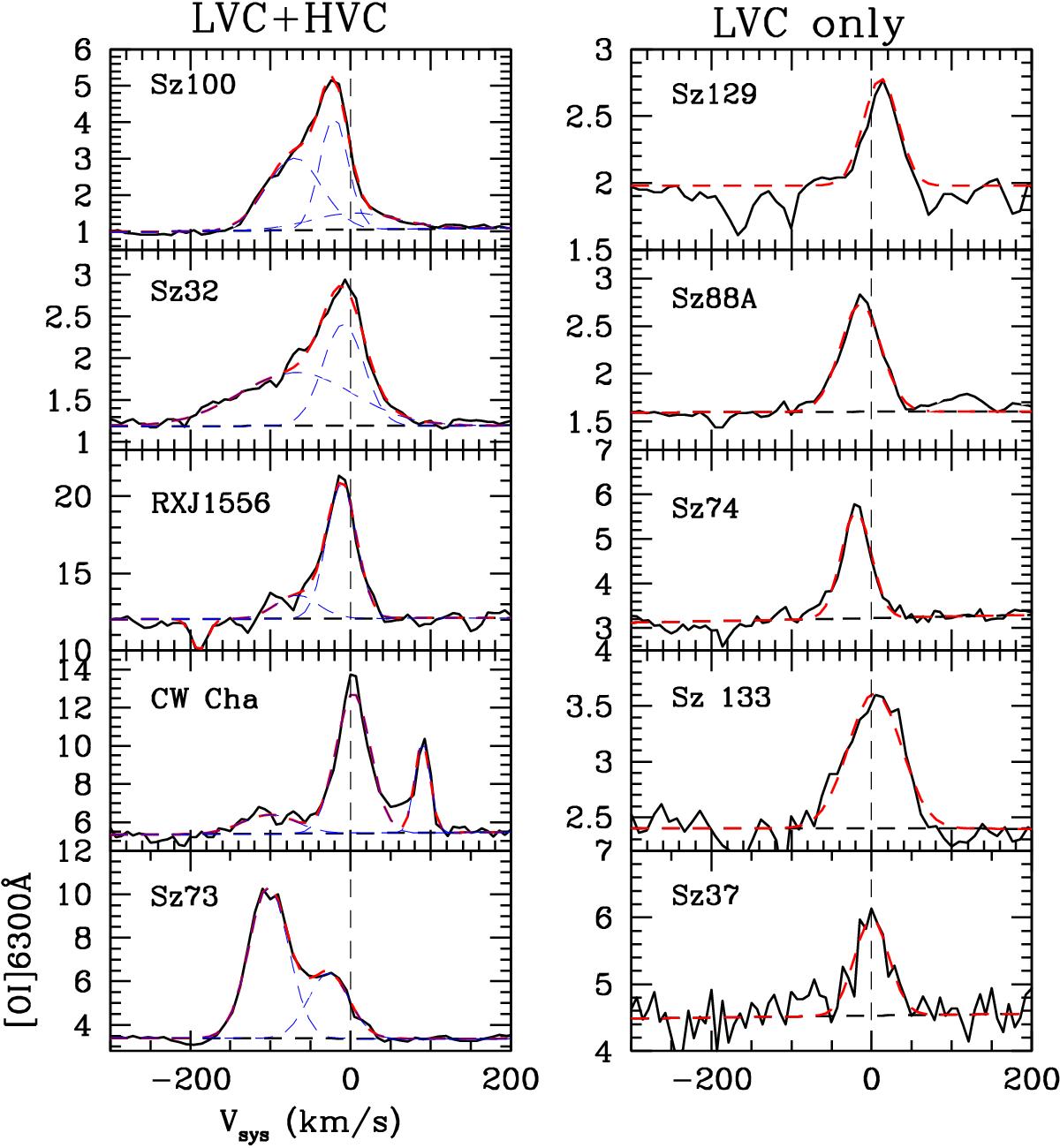