Coronal X-ray sources (CXSs) are phenomenon very often occurring in solar flares regardless of a flare size, duration or power. The nature of the sources was difficult to uncover for many years. It seems that at last, combining data from RHESSI and SDO/AIA, there is a unprecedented possibility to 'look inside' CXSs and to answer the questions about their formation, evolution and structure. We present a study of a CXS of the SOL2011-10-22T11:10 long-duration flare observed simultaneously with RHESSI and SDO/AIA. We focus our attention on the following questions: What was responsible for the CXS presence and long duration? Was there any fine structure in the CXS? Available data enables us to study a relation between the CXS and structures observed in EUV during the decay phase of the flare. X-ray emission recorded by RHESSI during the decay phase of the flare came from about 10 MK hot CXS. The source was observable for 5 hours. This long presence of the source could be supported by magnetic reconnection ongoing during the decay phase. Supra-arcade downflows, which are considered to be a manifestation of magnetic reconnection, were observed at the same time as the CXS. The source was co-spatial with the part of the hot supra-arcade region that had the highest emission measure and simultaneously the temperature within the range of RHESSI thermal-response. However, while the supra-arcade region was a dynamic region consisting of small-scale structures, the CXS seemed to be smooth, structureless. We run simulations using real and synthetic RHESSI data, but we did not find any strong evidence that the CXS had any small-scale structure. 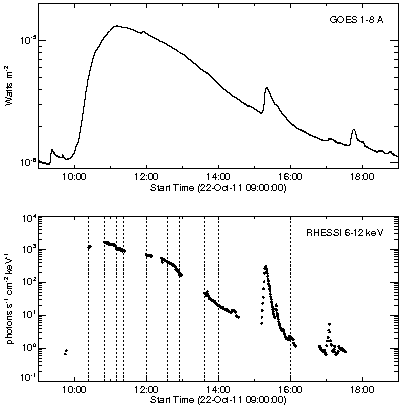