We present low-frequency (80-240 MHz) radio imaging of type III solar radio bursts observed by the Murchison Widefield Array on 2015 September 21. The source region for each burst splits from one dominant component at higher frequencies into two increasingly separated components at lower frequencies. For channels below ∼132 MHz, the two components repetitively diverge at high speeds (0.1c-0.4c) along directions tangent to the limb, with each episode lasting just ∼2 s. We argue that both effects result from the strong magnetic field connectivity gradient that the burst-driving electron beams move into. Persistence mapping of extreme-ultraviolet jets observed by the Solar Dynamics Observatory reveals quasi-separatrix layers (QSLs) associated with coronal null points, including separatrix dome, spine, and curtain structures. Electrons are accelerated at the flare site toward an open QSL, where the beams follow diverging field lines to produce the source splitting, with larger separations at larger heights (lower frequencies). The splitting motion within individual frequency bands is interpreted as a projected time-of-flight effect, whereby electrons traveling along the outer field lines take slightly longer to excite emission at adjacent positions. Given this interpretation, we estimate an average beam speed of 0.2c. We also qualitatively describe the quiescent corona, noting in particular that a disk-center coronal hole transitions from being dark at higher frequencies to bright at lower frequencies, turning over around 120 MHz. These observations are compared to synthetic images based on the MHD algorithm outside a sphere (MAS) model, which we use to flux-calibrate the burst data. 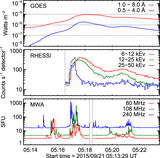