SN 1006 is the most attractive target for investigating the physics of collisionless shock waves faster than 2000 {km} {{{s}}}-1. We obtained UV and optical spectra and an Hα image of a 3000 {km} {{{s}}}-1 shock driven by a clump of ejecta that has overtaken the blast wave. It is 500 km s-1 faster than the filament studied earlier. We find kinetic temperatures of H, He, C, and N that are consistent with being mass proportional, suggesting little or no energy transfer among species. We also find evidence that the electron temperature is less than 10% of the proton temperature and that the velocity distribution of H atoms is non-Maxwellian. We measure a proper motion of 0.″34 ± 0.″01 yr-1 for the bow shock, which implies a distance to SN 1006 of 1.85 ± 0.25 kpc, and we discuss the role of plasma turbulence in determining the shape of the velocity distribution. 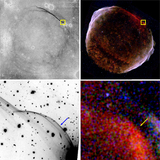