Interstellar Interloper 1I/2017 U1: Observations from the NOT and WIYN Telescopes

We present observations of the interstellar interloper 1I/2017 U1 (’Oumuamua) taken during its 2017 October flyby of Earth. The optical colors B - V = 0.70 ± 0.06, V - R = 0.45 ± 0.05, overlap those of the D-type Jovian Trojan asteroids and are incompatible with the ultrared objects that are abundant in the Kuiper Belt. With a mean absolute magnitude H V = 22.95 and assuming a geometric albedo p V = 0.1, we find an average radius of 55 m. No coma is apparent; we deduce a limit to the dust mass production rate of only ∼2 × 10-4 kg s-1, ruling out the existence of exposed ice covering more than a few m2 of the surface. Volatiles in this body, if they exist, must lie beneath an involatile surface mantle ≳0.5 m thick, perhaps a product of prolonged cosmic-ray processing in the interstellar medium. The light curve range is unusually large at ∼2.0 ± 0.2 mag. Interpreted as a rotational light curve the body has axis ratio ≥ {6.3}-1.1+1.3:1 and semi-axes ∼230 m × 35 m. A ≳6:1 axis ratio is extreme relative to most small solar system asteroids and suggests that albedo variations may additionally contribute to the variability. The light curve is consistent with a two-peaked period ∼8.26 hr, but the period is non-unique as a result of aliasing in the data. Except for its unusually elongated shape, 1I/2017 U1 is a physically unremarkable, sub-kilometer, slightly red, rotating object from another planetary system. The steady-state population of similar, ∼100 m scale interstellar objects inside the orbit of Neptune is ∼104, each with a residence time of ∼10 years. 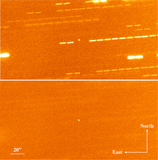