We present statistics from a survey of intervening Mg II absorption toward 100 quasars with emission redshifts between z = 3.55 and z = 7.09. Using infrared spectra from Magellan/FIRE, we detect 280 cosmological Mg II absorbers, and confirm that the comoving line density of {W}r> 0.3 \mathringA Mg II absorbers does not evolve measurably between z = 0.25 and z = 7. This is consistent with our detection of seven Mg II systems at z> 6, redshifts not covered in prior searches. Restricting to systems with {W}r> 1 Å, there is significant evidence for redshift evolution. These systems roughly double in density between z = 0 and z = 2-3, but decline by an order of magnitude from this peak by z∼ 6. This evolution mirrors that of the global star formation rate density, potentially reflecting a connection between star formation feedback and the strong Mg II absorbers. We compared our results to the Illustris cosmological simulation at z = 2-4 by assigning absorption to cataloged dark matter halos and by direct extraction of spectra from the simulation volume. Reproducing our results using the former requires circumgalactic Mg II envelopes within halos of progressively smaller mass at earlier times. This occurs naturally if we define the lower integration cutoff using SFR rather than mass. Spectra calculated directly from Illustris yield too few strong Mg II absorbers. This may arise from unresolved phase space structure of circumgalactic gas, particularly from spatially unresolved turbulent or bulk motions. The presence of circumgalactic magnesium at z> 6 suggests that enrichment of intra-halo gas may have begun before the presumed host galaxies’ stellar populations were mature and dynamically relaxed. 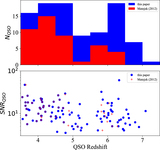