The Breakthrough Listen Search for Intelligent Life: 1.1-1.9 GHz Observations of 692 Nearby Stars

We report on a search for engineered signals from a sample of 692 nearby stars using the Robert C. Byrd Green Bank Telescope, undertaken as part of the Breakthrough Listen Initiative search for extraterrestrial intelligence. Observations were made over 1.1-1.9 GHz (L band), with three sets of five-minute observations of the 692 primary targets, interspersed with five-minute observations of secondary targets. By comparing the “ON” and “OFF” observations, we are able to identify terrestrial interference and place limits on the presence of engineered signals from putative extraterrestrial civilizations inhabiting the environs of the target stars. During the analysis, 11 events passed our thresholding algorithm, but a detailed analysis of their properties indicates that they are consistent with known examples of anthropogenic radio-frequency interference. We conclude that, at the time of our observations, none of the observed systems host high-duty-cycle radio transmitters emitting between 1.1 and 1.9 GHz with an Equivalent Isotropic Radiated Power of ̃1013 W, which is readily achievable by our own civilization. Our results suggest that fewer than ̃0.1% of the stellar systems within 50 pc possess the type of transmitters searched in this survey. 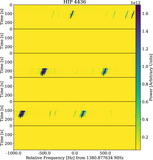