We present magnitudes and profile fits for 180 galaxies in the central field of the massive lensing cluster Abell 1689 using very deep imaging with the Hubble Space Telescope Advanced Camera for Surveys in the F814W bandpass. Previous work revealed an exceptionally large number of globular clusters (GCs) in A1689 and mapped their number density distribution. We decompose this number density map into GCs associated with individual cluster galaxies and ICGCs (intracluster GCs) associated with the intracluster light (ICL). In all, we measure GC specific frequencies S N for 33 cluster members and the ICL. The relation between S N and galaxy magnitude is consistent with the trend observed in Virgo, although some intermediate-luminosity galaxies scatter to {S}N> 10. We estimate that the ICL makes up 11% of the starlight in this field, whereas the ICGCs account for ∼35% of the GCs, both consistent with predictions from simulations. Galaxies with higher S N values tend to be rounder, and there is a marginally significant trend of decreasing S N with increasing specific angular momenta {λ }R. We also reevaluate the GC population in the A2744 Frontier Field, for which fewer than 1/10 as many GCs have been detected because of its larger distance. Finally, our core-Sérsic fit to the light profile of the A1689 brightest cluster galaxy implies a break radius of 3.8 kpc, among the largest known; we discuss implications of the sizable core and extensive GC population for the supermassive black hole in light of scaling relations. 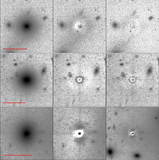