In this Letter we report the detection of chromospheric 3-minute oscillations in disk-integrated EUV irradiance observations during a solar flare. A wavelet analysis of detrended Lyα (from GOES/EUVS) and Lyman continuum (from Solar Dynamics Observatory (SDO)/EVE) emission from the 2011 February 15 X-class flare (SOL2011-02-15T01:56) revealed a ̃3 minute period present during the flare’s main phase. The formation temperature of this emission locates this radiation at the flare’s chromospheric footpoints, and similar behavior is found in the SDO/Atmospheric Imaging Assembly 1600 and 1700 Å channels, which are dominated by chromospheric continuum. The implication is that the chromosphere responds dynamically at its acoustic cutoff frequency to an impulsive injection of energy. Since the 3-minute period was not found at hard X-ray (HXR) energies (50-100 keV) in Reuven Ramaty High Energy Solar Spectroscopic Imager data we can state that this 3-minute oscillation does not depend on the rate of energization of non-thermal electrons. However, a second period of 120 s found in both HXR and chromospheric lightcurves is consistent with episodic electron energization on 2-minute timescales. Our finding on the 3-minute oscillation suggests that chromospheric mechanical energy should be included in the flare energy budget, and the fluctuations in the Lyα line may influence the composition and dynamics of planetary atmospheres during periods of high activity. 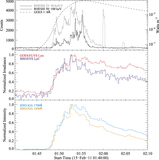