Chemical Mapping of the Milky Way with The Canada-France Imaging Survey: A Non-parametric Metallicity-Distance Decomposition of the Galaxy

We present the chemical distribution of the Milky Way, based on 2900 {\deg }2 of u-band photometry taken as part of the Canada-France Imaging Survey. When complete, this survey will cover 10,000 {\deg }2 of the northern sky. By combing the CFHT u-band photometry together with Sloan Digital Sky Survey and Pan-STARRS g,r, and I, we demonstrate that we are able to reliably measure the metallicities of individual stars to ∼0.2 dex, and hence additionally obtain good photometric distance estimates. This survey thus permits the measurement of metallicities and distances of the dominant main-sequence (MS) population out to approximately 30 {kpc}, and provides a much higher number of stars at large extraplanar distances than have been available from previous surveys. We develop a non-parametric distance-metallicity decomposition algorithm and apply it to the sky at 30^\circ < | b| < 70^\circ and to the North Galactic Cap. We find that the metallicity-distance distribution is well-represented by three populations whose metallicity distributions do not vary significantly with vertical height above the disk. As traced in MS stars, the stellar halo component shows a vertical density profile that is close to exponential, with a scale height of around 3 {kpc}. This may indicate that the inner halo was formed partly from disk stars ejected in an ancient minor merger. 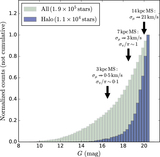