Over the past decade, the discovery of three unique stellar populations and a large number of confirmed pulsars within the globular cluster Terzan 5 has raised questions over its classification. Using the long-term radio pulsar timing of 36 ms pulsars in the cluster core, we provide new measurements of key physical properties of the system. As Terzan 5 is located within the galactic bulge, stellar crowding and reddening make optical and near-infrared observations difficult. Pulsar accelerations, however, allow us to study the intrinsic characteristics of the cluster independent of reddening and stellar crowding and probe the mass density profile without needing to quantify the mass-to-light ratio. Relating the spin and orbital periods of each pulsar to the acceleration predicted by a King model, we find a core density of {1.58}-0.13+0.13 × 106 {M}ȯ pc−3, a core radius of {0.16}-0.01+0.01 pc, a pulsar density profile of n\propto {r}-{3.14-0.53+0.52}, and a total mass of {M}{{T}}({R}\perp < 1.0 pc) ≃ 3.0 × 105 {M}ȯ , assuming a cluster distance of 5.9 kpc. Using this information, we argue against Terzan 5 being a disrupted dwarf galaxy and discuss the possibility of it being a fragment of the Milky Way’s proto-bulge. We also discuss whether low-mass pulsars were formed via electron-capture supernovae or exist in a core full of heavy white dwarfs and hard binaries. Finally, we provide an upper limit for the mass of a possible black hole at the core of the cluster of {M}BH}≃ 3× {10}4 {M}ȯ . 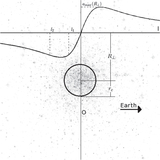