The identification of high-redshift, massive galaxies with old stellar populations may pose challenges to some models of galaxy formation. However, to securely classify a galaxy as quiescent, it is necessary to exclude significant ongoing star formation, something that can be challenging to achieve at high redshifts. In this Letter, we analyze deep ALMA/870 μm and SCUBA-2/450 μm imaging of the claimed “post-starburst” galaxy ZF 20115 at z = 3.717 that exhibits a strong Balmer break and absorption lines. The rest-frame far-infrared imaging identifies a luminous starburst 0.″4 ± 0.″1 (∼3 kpc in projection) from the position of the ultraviolet/optical emission and is consistent with lying at the redshift of ZF 20115. The star-forming component, with an obscured star formation rate of {100}-70+15 {M}⊙ {{yr}}-1, is undetected in the rest-frame ultraviolet but contributes significantly to the lower angular resolution photometry at rest-frame wavelengths ≳3500 Å. This contribution from the obscured starburst, especially in the Spitzer/IRAC wavebands, significantly complicates the determination of a reliable stellar mass for the ZF 20015 system, and we conclude that this source does not pose a challenge to current models of galaxy formation. The multi-wavelength observations of ZF 20115 unveil a complex system with an intricate and spatially varying star formation history. ZF 20115 demonstrates that understanding high-redshift obscured starbursts will only be possible with multi-wavelength studies that include high-resolution observations, available with the James Webb Space Telescope, at mid-infrared wavelengths. 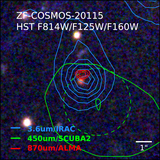