Element abundances in the solar photosphere, chromosphere, transition region, and corona are key parameters for investigating sources of the solar wind and for estimating radiative losses in the quiet corona and in dynamical events such as solar flares. Abundances in the solar corona and photosphere differ from each other depending on the first ionization potential (FIP) of the element. Normally, abundances with FIP values less than about 10 eV are about 3-4 times more abundant in the corona than in the photosphere. However, recently, an inverse FIP effect was found in small regions near sunspots where elements with FIP less than 10 eV are less abundant relative to high FIP elements (≥slant 10 eV) than they are in the photosphere. This is similar to fully convective stars with large starspots. The inverse FIP effect is predicted to occur in the vicinity of sunspots/starspots. Up to now, the solar anomalous abundances have only been found in very spatially small areas. In this paper, we show that in the vicinity of sunspots there can be substantially larger areas with abundances that are between coronal and photospheric abundances and sometimes just photospheric abundances. In some cases, the FIP effect tends to shut down near sunspots. We examine several active regions with relatively large sunspots that were observed with the Extreme-ultraviolet Imaging Spectrometer on the Hinode spacecraft in cycle 24. 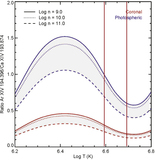