Determinations of the 12C/13C Ratio for the Secondary Stars of AE Aquarii, SS Cygni, and RU Pegasi

We present new moderate-resolution near-infrared spectroscopy of three CVs obtained using GNIRS on Gemini-North. These spectra covered three 13CO bandheads found in the K-band, allowing us to derive the isotopic abundance ratios for carbon. We find small 12C/13C ratios for all three donor stars. In addition, these three objects show carbon deficits, with AE Aqr being the most extreme ([C/Fe] = -1.4). This result confirms the conjecture that the donor stars in some long-period CVs have undergone considerable nuclear evolution prior to becoming semi-contact binaries. In addition to the results for carbon, we find that the abundance of sodium is enhanced in these three objects, and the secondary stars in both RU Peg and SS Cyg suffer magnesium deficits. Explaining such anomalies appears to require higher mass progenitors than commonly assumed for the donor stars of CVs.

Based on observations obtained at the Gemini Observatory, which is operated by the Association of Universities for Research in Astronomy, Inc., under a cooperative agreement with the NSF on behalf of the Gemini partnership: the National Science Foundation (United States), the National Research Council (Canada), CONICYT (Chile), Ministerio de Ciencia, Tecnología e Innovación Productiva (Argentina), and Ministério da Ciência, Tecnologia e Inovação (Brazil). 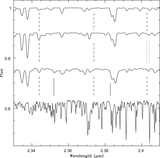