We present the results of a Hubble Space Telescope ACS/HRC FUV, ACS/WFC optical study into the cluster populations of a sample of 22 Luminous Infrared Galaxies in the Great Observatories All-Sky LIRG Survey. Through integrated broadband photometry, we have derived ages and masses for a total of 484 star clusters contained within these systems. This allows us to examine the properties of star clusters found in the extreme environments of LIRGs relative to lower luminosity star-forming galaxies in the local universe. We find that by adopting a Bruzual & Charlot simple stellar population model and Salpeter initial mass function, the age distribution of the clusters declines as {dN}/dτ ={τ }-0.9+/-0.3, consistent with the age distribution derived for the Antennae Galaxies, and interpreted as evidence for rapid cluster disruption occurring in the strong tidal fields of merging galaxies. The large number of {10}6 {M}⊙ young clusters identified in the sample also suggests that LIRGs are capable of producing more high-mass clusters than what is observed to date in any lower luminosity star-forming galaxy in the local universe. The observed cluster mass distribution of {dN}/{dM}={M}-1.95+/-0.11 is consistent with the canonical -2 power law used to describe the underlying initial cluster mass function (ICMF) for a wide range of galactic environments. We interpret this as evidence against mass-dependent cluster disruption, which would flatten the observed CMF relative to the underlying ICMF distribution. 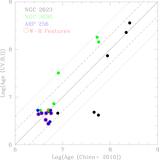