We study galaxy mass assembly and cosmic star formation rate (SFR) at high redshift (z ≳ 4), by comparing data from multiwavelength surveys with predictions from the GAlaxy Evolution and Assembly (gaea) model. gaea implements a stellar feedback scheme partially based on cosmological hydrodynamical simulations, which features strong stellar-driven outflows and mass-dependent timescales for the re-accretion of ejected gas. In previous work, we have shown that this scheme is able to correctly reproduce the evolution of the galaxy stellar mass function (GSMF) up to z ∼ 3. We contrast model predictions with both rest-frame ultraviolet (UV) and optical luminosity functions (LFs), which are mostly sensitive to the SFR and stellar mass, respectively. We show that gaea is able to reproduce the shape and redshift evolution of both sets of LFs. We study the impact of dust on the predicted LFs, and we find that the required level of dust attenuation is in qualitative agreement with recent estimates based on the UV continuum slope. The consistency between data and model predictions holds for the redshift evolution of the physical quantities well beyond the redshift range considered for the calibration of the original model. In particular, we show that gaea is able to recover the evolution of the GSMF up to z ∼ 7 and the cosmic SFR density up to z ∼ 10. 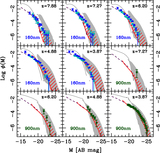