We present hydrodynamic simulations of gas clouds inflowing from the disk to a few hundred parsec region of the Milky Way. A gravitational potential is generated to include realistic Galactic structures by using thousands of multipole expansions (MEs) that describe 6.4 million stellar particles of a self-consistent Galaxy simulation. We find that a hybrid ME model, with two different basis sets and a thick-disk correction, accurately reproduces the overall structures of the Milky Way. Through non-axisymmetric Galactic structures of an elongated bar and spiral arms, gas clouds in the disk inflow to the nuclear region and form a central molecular zone-like nuclear ring. We find that the size of the nuclear ring evolves into ∼ 240 {pc} at T∼ 1500 {Myr}, regardless of the initial size. For most simulation runs, the rate of gas inflow to the nuclear region is equilibrated to ∼ 0.02 {M}⊙ {{yr}}-1. The nuclear ring is off-centered, relative to the Galactic center, by the lopsided central mass distribution of the Galaxy model, and thus an asymmetric mass distribution of the nuclear ring arises accordingly. The vertical asymmetry of the Galaxy model also causes the nuclear ring to be tilted along the Galactic plane. During the first ∼100 Myr, the vertical frequency of the gas motion is twice that of the orbital frequency, thus the projected nuclear ring shows a twisted, ∞ -like shape. 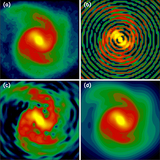